Muslim Cleric: If Women Don’t Want to Get Raped, Politicians Should Make it Illegal for Them to Dress Provocatively July 20, 2012 Hemant Mehta

Muslim Cleric: If Women Don’t Want to Get Raped, Politicians Should Make it Illegal for Them to Dress Provocatively

York University (in Canada) has been the site of several sexual assaults over the past few weeks and students are angry because they don’t feel the school has done enough to prevent future attacks.

Al-Haashim Kamena Atangana, a Muslim cleric, wrote to the Toronto Sun to offer his own suggestions as to how these crimes can be stopped:

I wanted to mention that the reason why these sex attacks are continuously happening is because the Canadian laws, which gives too much freedom to women, are the cause of these sex attacks. It has been revealed that every 5 seconds a woman is being sexually assaulted in North America. Women in North America are falling victims of the Democratic Freedom that you they passionly believe in. The reason why a woman gets raped is because of the way she dress. Women dress so provocatively so much that they receive too much attention for themselves and that attention at times leads to death.

If the law enforcements and the Canadian politicians were very serious about solving this problem, they would introduce laws that would make it illegal for women to dress provocatively in the streets. It is true that many people would object to this if that were to happen. and this will definitely create protests and opposition. However by arresting sexual predators is not going to solve the problem because as long women continue to dress like this there will always be perverts and rapist who will continue to remain on the loose.

The whole letter is beyond idiotic, but that last line is the kicker for me: If women dress a certain way, we should blame them for whatever the perverts/rapists do.

Nowhere in the letter does he call on the rapists to not rape them. Because, you know, that would be crazy.

It’s possible the whole thing could be a Poe. Atangana’s website looks like a four-year-old made it… but there are pictures of the guy and responses to his letter. (Just FYI, even other Muslims are saying this guy’s full of shit.)

And then, just to capitalize on the inevitable hordes of people coming to their site to see this letter, the Toronto Sun editors, in all their wisdom, also created what has to be the most gratuitous use of an online poll ever: 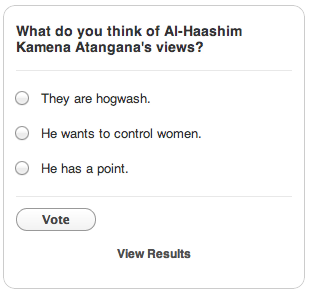 You know, we’ve seen this problem all over the Internet where women (and some men) try to explain the concepts of misogyny and feminism to people who just don’t get it. This might be a better way to educate them. Just make them read this letter. They’ll stop arguing immediately.