Should Atheists Censor Books Like This One…? July 18, 2012 Claudia

Sometimes an ethical question can strike you when you least expect it.

A few days ago I found myself wandering idly through the book section of a charity shop, lazily looking for something requested by a friend for her three-year-old son. I picked out a thin book at random, and stopped dead when I realized what I was looking at.

The book, titled The Creation Series Book 6, Animals, is part of a Creationist book series oriented towards children ages 3 to 4. 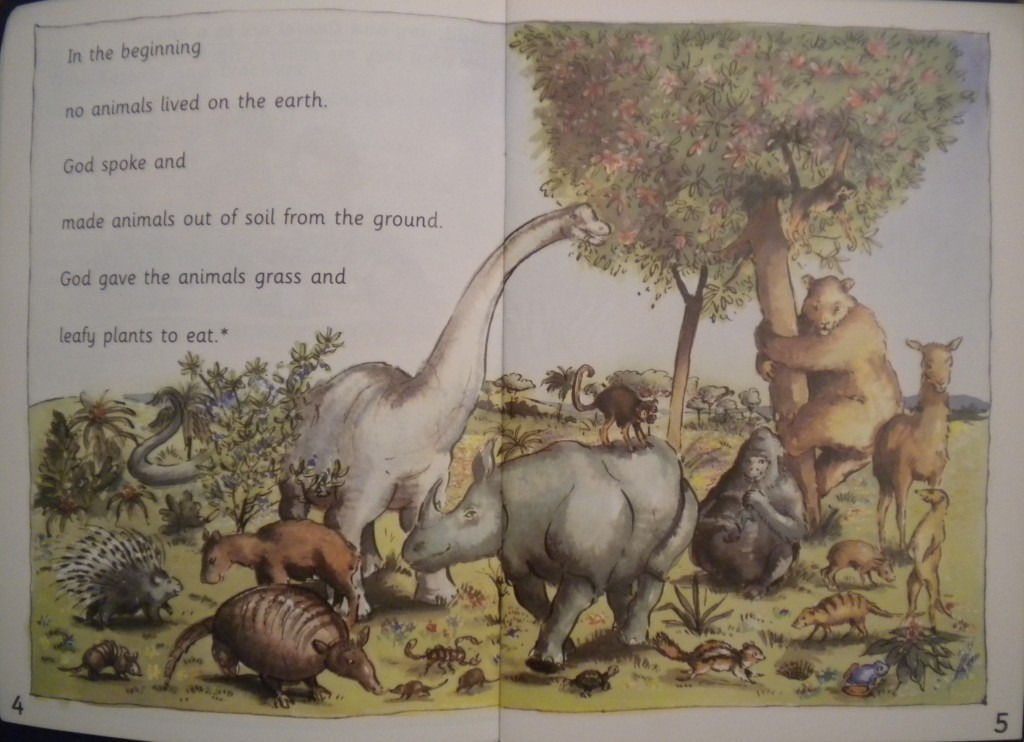 In the beginning
no animals lived on the earth.
God spoke and
made animals out of soil from the ground.
God gave the animals grass and
leafy plants to eat.*

You may be wondering what that asterisk is all about.

Here’s what it says at the end of the book:

The animals were tame vegetarians and lived alongside man quite amicably when God made them on the same day of creation (the sixth day). It was only after the fall of man (see Genesis 3) that some animals became wild and aggressive and changed from being vegetarian to meat eaters, e.g. lions.

Presumably the giant paws and teeth of the bear in the illustration were used for digging for and chewing on roots. The stinger on the scorpion was probably filled with nice apple juice. And the quills on the porcupine were simply to protect it from excessive hugs! No word on what happened to the happy dinosaur.

I guess explaining how God drowned all those nice animals plus a whole bunch of human children and how the dinos were left off the ark is for the more mature 9 and 10-year-olds.

I quickly flipped through the book, halfway between dismay and amusement, then put it back and started to leave the store. Somehow, I was unable to do it. Images of wide-eyed children being misled by well-illustrated nonsense plagued me. In the end, I paid 50 pence (around 75 cents) and took it with me.

Generally speaking, when it comes to books and children, the consensus is that the more books children read, the better. But here, the aim is just the opposite; I bought to book to keep it away from the eyes of children.

This was not a book in a public classroom, nor was it masquerading as accurate scientific data (though it manages a startling number of scientific inaccuracies for a book with a word count considerably less than this posts’) and doesn’t mention Hell or Judgment at all, but I’m still very uncomfortable with the idea of more kids turning their eyes away from science in favor of superstition.

I know that in the larger scheme of things, removing one book from one store will do next to nothing in the battle for secularism, but I’m still left to wonder: Is there something inherently bad about taking a book to prevent it from being read? Also, what in the world should I do with the damn thing, considering I balk at the idea of tossing any book, even this one, in the garbage?

[Update]: I see from the comments that there may be some confusion about the purchase of the book. I bought it from a charity shop that sells donated materials, including this particular book. My very modest sum will go towards local hospice care, not towards creationist publishers.

July 18, 2012 University of Nebraska - Omaha Student Challenges 'Atheist Chicks Are Easy' Remark
Browse Our Archives
What Are Your Thoughts?leave a comment