Alexander Aan: Our Plea to the President, My Plea to You July 17, 2012 Paul Fidalgo

Alexander Aan: Our Plea to the President, My Plea to You 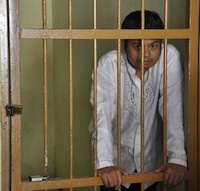 I’ll begin with the lede: There is a critical petition launched by the Center for Inquiry on behalf of Alexander Aan, the jailed Indonesian atheist (I promise this won’t be the only thing I write about here, but this is very important). We want the White House to speak out on his behalf, but I describe this as critical because in order to guarantee a response from the Obama administration, we need to muster 25,000 signatures by August 16th, 2012.

I believe we can do it, but it means we all have to do more than just click and forget it. I get it, it’s really easy to feel very much removed from Alexander’s situation. He’s thousands of miles away and part of a culture that makes little sense to us in the west. His crisis, which is actually hardly unique, can seem remote and abstract to us.

But listen: In so many respects, Alexander Aan has a great deal in common with many of the readers of this site and people we know. We don’t know him well, of course, but we do know that he is an atheist and a skeptic who values science and reason. He keeps a blog about his interests and posts relevant material on social networking sites like Facebook. He has a satirical sense of humor that can offend those with an investment in a religiously conservative status quo.

But the great chasm that separates us from Alexander is not really physical distance. This very moment, Alexander sits in an Indonesian prison cell, where he is condemned to spend at least two and a half years, saddled with an exorbitant fine, and under constant threat for his life — indeed, he has already been beaten by an angry mob once. What should be galling to us is that Alexander’s “criminal offense” was his very similarity our own community of freethinkers: charged with atheism (a crime in Indonesia) and convicted of “inciting religious hatred or hostility.”

As these violations of basic human rights have unfolded, CFI (my employer) has been working to raise awareness of Alexander’s plight and to do what we can to see him exonerated and freed. We’ve protested outside the Indonesian Consulate in New York City, demonstrated in front of the Indonesian Embassy in Washington, written letters demanding his release to Indonesian government officials and diplomats, and written and spoken about him on our blogs and podcasts.

I feel like our latest move, this petition, might be our best hope to get something moving for Alexander. I know you’ll have no problem signing it, but then our challenge is to spread the word. To tell all our friends and social network connections that, in between the image macros and GIFs, there is a guy who needs this community’s help. He knows we’re rooting for him. But let’s do just that little bit more — if we can’t move mountains for him, let’s at least see if we can nudge a White House.

July 17, 2012 Foundation Beyond Belief Seeks Fall Interns
Browse Our Archives
What Are Your Thoughts?leave a comment