Especially noteworthy was UNLV’s work bringing in speakers, running a lending library, and hosting discussions. They are very focused on activism to avoid conflict, for example their work with the Westboro Baptist Church. UNLV has also done an impressive amount of charity work, from fundraising, to a book repair & book drive, to sponsoring a local family for the holidays. They have also cooperated with the Young Democrats group and Spectrum, plus two off-campus groups. SSA at UNLV is a very sizable community of over 100 members. They have weekly meetings with various formats and lots of fun stuff. 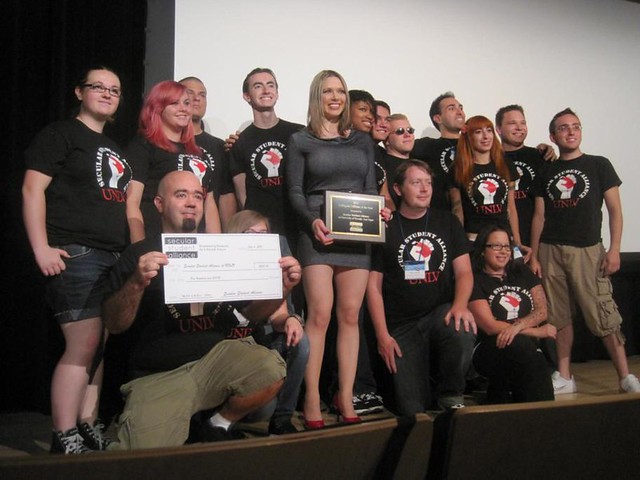 The honor is a first for the chapter in its near four-year history. There are over 360 SSA affiliates worldwide.

“[The award] means a lot to us,” said Michael Gobaud, a former UNLV SSA president who attended the conference. “It just kind of validates all of the restructuring efforts that I and others put into place and everything [we] thought would save the group. It’s nice to know that you were successful.”

Fledgling at its start, the UNLV SSA struggled to find interested students, and with low membership, found difficulty in getting the organization off the ground.

“The group had died and had zero activity for about six months,” Gobaud said. “Everyone just kind of gave up on the idea.”

But after Gobaud became president in January 2011, he decided to lead a relaunch of the UNLV SSA — a group for students who do not believe in, or who question the existence of God, such as those who identify as atheist or agnostic.

I had a chance to talk with several of the group members at the conference. They were dedicated, filled with enthusiasm, and made me wish I was back in school so I could do what they were doing. It was all the more impressive when you consider they had to travel 34 hours to get to the conference and still managed to bring 17 people with them!

July 16, 2012 That's Not Quite How Natural Selection Works...
Browse Our Archives