A Letter of Thanks from Alexander Aan July 14, 2012 Paul Fidalgo

A Letter of Thanks from Alexander Aan 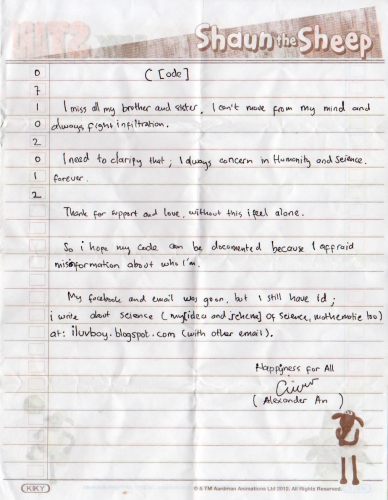 Indonesian atheist Alexander Aan, jailed for stating his atheism, has heard us.

Last week, I wrote about the significance of Alexander’s plight, making the case for putting serious energy toward his struggle both for the sake of atheism-writ-large and for Alexander himself. It moves me to no end to know that he knows we’re rooting for him. Michael Nugent posts at his blog that Alexander has written a letter from prison to his supporters. The English is somewhat broken, but the first half of the letter is perfectly clear:

I miss all my brother and sister. I can’t move from my mind and always fight infiltration.

I need to clarify that; I always concern humanity and science. Forever.

Thank for support and love. Without this I feel alone.

You can read the whole letter as written here (some of the handwriting is hard to make out). He also notes that he kept a blog with what I think might be the best URL ever, “iluvboy.blogspot.” Now it takes real courage to have a web address like that.

But in all seriousness, thank you, Alexander, for reaching out to us. We haven’t forgotten you.