Those crazy awesome folks at Ask An Atheist are devoting themselves to a 24-hour video blogathon starting today at 12:00p (PST) and running into Saturday. All proceeds will go to Washington United for Marriage, the organization working to fight for marriage equality in Washington State. And that battle is going to be an expensive one! The National Organization for Marriage’s executive director Christopher Plante predicts each side will be spending millions on this campaign. That’s why this and every other fund raiser for marriage equality is so important; we can’t let the haters win! 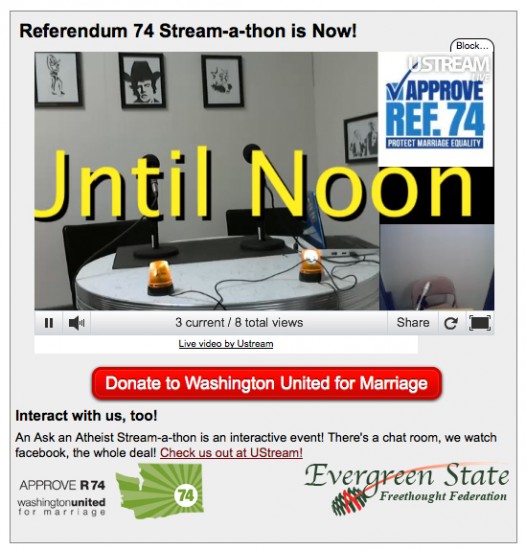 Tune in to the blogathon and expect the conversation to go everywhere. (My prediction: Aquaman will receive some air time.) And you can be a part of the conversation. They’ll be taking questions throughout the night and following day. Don’t have time to tune in but still want to help? Donations can be made here.

July 13, 2012
Where is the Cranston High School West Prayer Banner?
Next Post