Now this is how you do marketing. Forget billboards. The Minnesota Atheists and American Atheists are promoting their groups via a minor league baseball team, the St. Paul Saints: 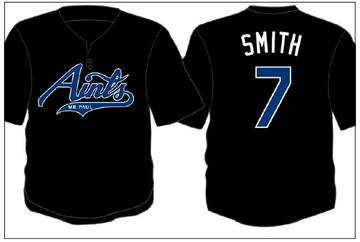 The letter “S” will be covered up on the word “Saints” throughout the ballpark and we’ll have an information/greeting table at the main entrance. American Atheists president Dave Silverman will throw out the first ceremonial pitch of the game. After the game there will be a fireworks display.

And just in time for the Minnesota Regional Atheists Conference taking place the second week of August.

Glenn Davis at SportsGrid is a little surprised the team went through with the promotion:

We have to say, despite the Saints obviously being their own entity and obviously not averse to weird promotional stunts, we’re a little surprised they went through with this. They must have a fair number of religious fans, to say nothing of religious players on the team. They wouldn’t be thrilled about this change, no? Or maybe we’re overthinking it, and everybody sees this for the one-night goof that it is.

Still, we wouldn’t be surprised to see a hyper-religious group show up in protest: it’s an atheist takeover of the national pastime, after all. We’d say, “Somewhere, Christopher Hitchens nods in approval,” but something tells us he wouldn’t have wanted us to.

Even if any religious fans are upset, they can always sponsor a future game. This isn’t some special privilege only atheists get. Kudos to the Saints’ promotional department for seeing the humor in all this and having some fun. If you’d like to purchase tickets to the game, you can get more information here.

July 12, 2012 Two Priests Want Edward Tarte to Repent
Browse Our Archives
What Are Your Thoughts?leave a comment