Last year, when American Atheists paid for flyover banners across the country on Independence Day, some pilots refused to fly planes with the evil, scary message “Atheism Is Patriotic – atheists.org.”

This year, that doesn’t seem to be a problem, and the banner will fly over New York City: 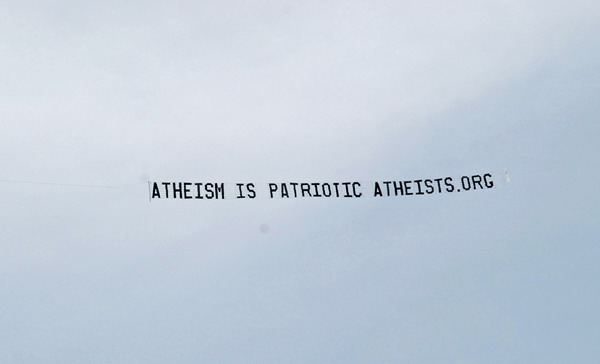 Teresa MacBain, Public Relations Director, stated, “As a pastor I often reminded my congregants that ‘God’s law was higher than man’s law.’ What that really meant was that the people should take orders from the church, above our civil government. Atheism, being the absence of any religious beliefs, implies that human law alone is supreme over humanity. Here in America, the highest law is in Washington DC, not some fictional heaven. That’s patriotic.“

Wow, Teresa MacBain is off to a strong start already 🙂

Even if you think the sign is contentious, keep in mind this is all about getting publicity for American Atheists. They want reporters to ask them about the sign so they can get their message out to the people who may be on the fence about their religious views. They’re also not insinuating that religious people are not patriotic, even though I’m sure religious groups will be quick to jump to that conclusion.

July 3, 2012 Atheist Billboards Go Up in Idaho
Browse Our Archives
What Are Your Thoughts?leave a comment