In Pittsburgh, Pennsylvania, an unnamed boy participated in what is evidently a growing trend among young people called the “Salt and Ice Challenge.” It has apparently become so wide-spread that officials at a Philadelphia middle school sent out notices to parents warning them about the activity.

Here’s how it works: Participants wet their skin, cover it with table salt, and then press an ice pack over the salt to cause intense burning.  In this case, the boy’s twin brother did it to him for 20 minutes… this was the result (sorry!): 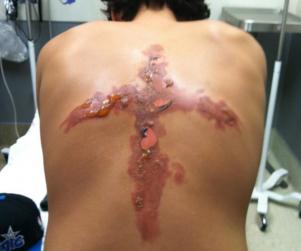 The thing is, I watched a few videos of people doing this challenge (time I will never ever get back) and everyone seemed to be doing smaller spots on their arms or just holding the ice in their hands — painful I’m sure, but nothing like this.  The day after this boy had this cross burned into his back, his mother took him to the hospital with second degree burns.

Because the boy’s identity is being withheld, I don’t know much about the boy’s religious background, but what do you think? Do we chalk this up to “boys will be boys” or is this a case of religion driving people to extremes?

(via The Good Atheist)