The Voice of Chuck E. Cheese Wants You to Accept Jesus

Duncan Brannan (below) played the voice of Chuck E. Cheese for nearly two decades. He was recently let go from that position, but he left his fans — apparently he had fans… — a parting message (PDF): 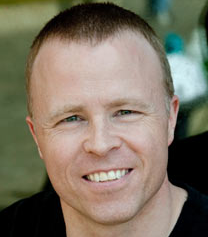 But, more than all of that, here’s what I know: I am a Christian, and that is all that matters. I am one who believes that salvation (from sin, God’s judgment, and hell) is found in no other name under heaven but the risen Lord and Savior and returning King, Jesus Christ. And, if being the voice of Chuck E. Cheese for any length of time has meant anything to me, it was never about a paycheck because God will always provide for His children in one way or another. No. What it was about, what my sincere hope is that you — you Fans, you parents, and all you kids who have loved Chuck E. Cheese over the years — have seen, heard, or experienced Jesus Christ in and through my life in some way. For He is all that matters, now and for all eternity. I hope that you have seen Christ in me. I hope that He touched your life through mine in some special way and, if that happened, then I was doing my one true real job, which is sharing Him with all of you.

I didn’t think it was possible to make that rodent even creepier, but Brannan found a way.