Fellow Patheos blogger Marc Barnes over at Bad Catholic has realized why the Catholic mandate against contraception enjoys such pitiful support amongst American women.

It’s not because it’s an archaic, unrealistic standard that turns couples — and particularly women — into slaves of their own biology despite the existence of readily available alternatives. The actual problem is that it hasn’t been sold in a sufficiently attractive package.

Enter the new website 1Flesh, which seeks to sell 19th century ideas (12th? 1st?) in a 21st century package, Facebook page and all. According to Barnes, its purpose is “documenting the silliness that is artificial contraception, a grassroots movement promoting great, natural sex to the entire universe.” He then cites a list of “facts” that range from outright false to outrageously misleading.

Birth control has done nothing to reduce the rate of unplanned pregnancies.

This one falls somewhere between outright false and outrageously misleading. It is a kernel of truth buried under a pile of BS. 1Flesh cites a CDC statement that 49% of pregnancies in the US were unintended. They then crow that this is despite the “near universal use of contraception.” Unhelpfully for them, the CDC statement they link to directly contradicts this. In fact, unintended pregnancy is higher in those populations least likely to use contraception, namely the very young and the poor. The CDC states that these stats can be improved by both expanding access to contraception and increasing consistent and correct usage amongst the sexually active. I guess 1Flesh would have its readers believe that the CDC is a solid, unquestionable source for one paragraph, but a biased, unreliable source for the next.

The Pill increases a woman’s risk of breast cancer.

This one is a favorite of the anti-Pill crowd. Multiple studies do indicate that use of the pill carries a slightly increased risk of breast cancer. It also appears to decrease the risk of ovarian and endometrial cancers, a fact that mysteriously never seems to find its way into anti-contraceptive literature. The reality is that hormonal contraceptives are medications, thus (of course) not risk free. Medication of any kind is a trade-off, where we decide that the benefit outweighs the risk. There is no such thing as a risk-free medication, and expecting hormonal contraceptives to somehow be different is practicing a standard for them that they do not demand of any other medication.

Condoms ruin sex and they’ve been remarkably ineffective in the fight against HIV and STDs.

This is when all of this stops being simple ignorance and starts becoming infuriating. The notion that condoms are ineffective in preventing HIV infections is outright false. What we see reflected here, in my mind, is the single greatest moral outrage committed by the Catholic Church. The suffering of thousands of children sexually abused by priests is horrific, of course, but even that pales in comparison to the effect of Catholic dogma on Africa. The Church has perpetuated outright falsehoods, claiming that condoms do nothing to prevent HIV transmition, in countries where the disease has ravaged millions. The deaths of untold numbers of men, women, and children lay at the feet of this policy, and no amount of hip graphics and faux-coolness can change that.

This is just one example of their misleading infographics:

And this one gets to the heart of what they think about condoms: 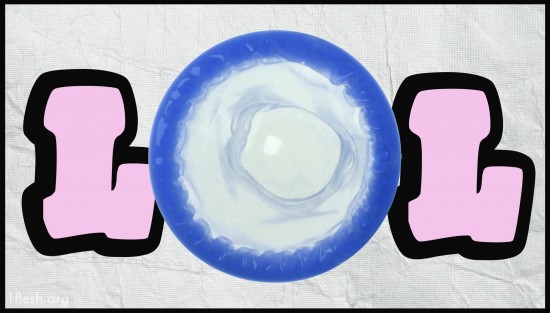 The website counters its utter lack of accuracy with some pretty decent graphics. The button leading to the claim that the pill doesn’t reduce unplanned pregnancies features a nice photo of Neil Patrick Harris, making me wonder what he’d think about his image being used by people who consider various levels of his life abominations. 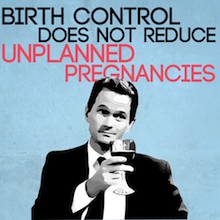 The website seeks to promote a “natural family planning” method called NaProTECHNOLOGY). Promoters of NaProTECHNOLOGY), developed based on the Creighton Method by the folks at the Pope Paul VI Institute (no joke), claim a “typical use” effectiveness of 96.8% in preventing pregnancy.

Keep in mind, though, that the number is artificially higher because they purposely exclude most pregnancies from their “fail” rate, assuming the couple intended to get pregnant. Yes, you read that right — they count most pregnancies as “intended” when calculating their failure rate, something virtually no other contraceptive study does.

Maybe I should do that with my cells in the lab? Oh, I didn’t kill them. The fact that they’re dead just indicates that they committed suicide!

In the end 1Flesh is tilting at windmills. The contraception ship has sailed. The vast majority of women, including the vast majority of Catholic women, have decided that they prefer to control when and with whom they have children and the 95% of Americans who have pre-marital sex will usually make the prevention of STDs and premature parenthood a priority.

1Flesh will fail at making uncontrolled fertility and high-risk sex cool, and that’s a blessedly good thing. Still, it is utterly irresponsible and dangerous for anyone to attempt to convince people not to use contraception. It’s one thing to preach abstinence. It’s another to tell people who are having sex without the intent to have children to stay away from highly-effective forms of contraception.

***Update***: This is Hemant. I just had to toss in this screenshot of a comment made at Marc’s blog. If this is the gist of anti-contraception thinking, I weep for all humanity:

July 1, 2012 Forget Prayer; This Is How You Can Do Something Useful Regarding the Wildfire Crisis in Colorado
Browse Our Archives
What Are Your Thoughts?leave a comment