Just when you think you’ve heard it all.

I want everyone reading this to take a moment to compose yourself.  This is going to be an extremely serious discussion topic.  Because the Fundamentalists have seized the Loch Ness Monster.

We’re all familiar with this photo of Nessie, right? 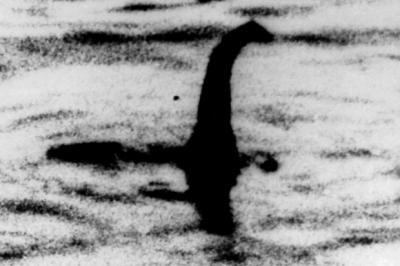 Here she is in all of her glory.  Totally not fake.  Totally not a piece of plastic wood attached to a toy submarine. Sure, some people think that the confession was falsified.  Because it’s much more likely that there is a giant monster in a lake that no one can seem to get a decent picture of than someone pulling a prank that got completely out of hand.  That’s just classic Occam’s Razor.  Regardless, there is very, very, very little independently verifiable evidence to support the existence of Nessie.  And as good little skeptics, we love independently verifiable evidence, don’t we?

So sure, it’s pretty darn unlikely that there is a monster living in Loch Ness.

But Accelerated Christian Education (ACE) doesn’t let a little thing like “no good evidence” stop them!  ACE is a fundamentalist Christian curriculum used in private and home schools.  And (surprise!) they are a bit dubious about evolution.

Read with me this excerpt from their “biology” textbook:

Are dinosaurs alive today? Scientists are becoming more convinced of their existence. Have you heard of the ‘Loch Ness Monster’ in Scotland? ‘Nessie’ for short has been recorded on sonar from a small submarine, described by eyewitnesses, and photographed by others. Nessie appears to be a plesiosaur.

So when scientists all agree that the most likely and widely supported explanation for the diversity of life on Earth is evolution by natural selection, the fundies are all “AHHH! Conspiracy!  You are repressing my ability to pray with all of your science mumbo jumbo!”… but when a couple of people wander off the beaten path and hypothesize that maybe it’s not outside of the realm of possibilities that some kind of water-dwelling creature could be residing in Loch Ness, they just jump all over that.

So, in and of itself, it is weird that this textbook is discussing the Loch Ness Monster. It is infinitely weirder that they think that this disproves evolution.

Jonny Scaramanga is a graduate of the ACE program, and apparently it didn’t do an adequate job of scrambling his brains, because he is now fighting against ACE.

He says that Nessie is, to them:

…evidence that evolution couldn’t have happened. The reason for that is they’re saying if Noah’s flood only happened 4000 years ago, which they believe literally happened, then possibly a sea monster survived.  If it was millions of years ago then that would be ridiculous. That’s their logic. It’s a common thing among creationists to believe in sea monsters… One of these texts from Bob Jones University Press claims that dinosaurs were fire-breathing dragons. It has little to do with science as we currently understand. It’s more like medieval scholasticism

Oh yeah, and also they have been cleared to to receive state voucher money transferred from public schools.  As Scaramanga says:  “There’s a lot of public funding going to private schools, probably around 200,000 pupils are receiving this education.”

So we’re paying for this.

June 25, 2012
Premarital Counseling in the Military Should Not be Based on Christian Beliefs
Next Post