The Bus Monitor Got Bullied by Those Kids Because We Took Prayer Out of Public School June 22, 2012 Hemant Mehta

Have you seen that awful video of bus monitor Karen Klein being mercilessly mocked by a group of middle school thugs?

Karen Gushta of Truth in Action Ministries knows why that bullying occurred: Because those kids didn’t have enough Jesus in their lives:

[Gushta] believes this cultural demise began when prayer was taken out of public schools.

“Since that time, the character of our children has gone into a downward spiral,” she laments, “and that’s why I view this as just one of many, many examples that could be multiplied all across the country.”

And Gushta has little hope of that turning around without the return of moral training in classrooms.

“Unless we return to the moral standards of God’s Word, of his laws, of the Ten Commandments — unless we return those to our public schools, we’re just going to continue to see more and more of this kind of behavior,” she asserts. “And the prospect of that should truly frighten us all.”

Right. Because back when prayer was mandatory in public schools, nothing bad ever happened ever. And I’m sure the way their parents raised them had nothing to do with it at all.

Incidentally, OneNewsNow polled their readers on this very matter. Their reason for why the kids acted so horribly? “Deterioration of the traditional family.” (WHY DO GAYS AND LESBIANS HATE BUS MONITORS SO MUCH?!) 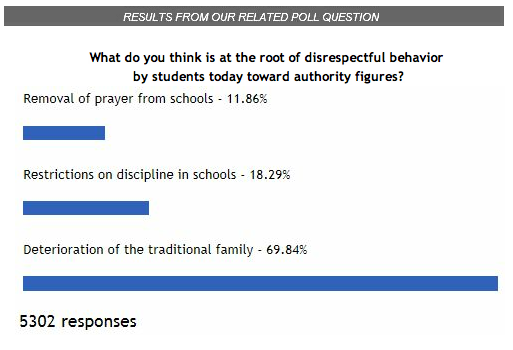 Putting Christianity back in public school would only give kids like this more justification to bully gay kids, non-Christians, etc. Whatever the cause for their behavior was, religion certainly isn’t the answer to it.

There’s some good news from all of this: The Internet World has pitched in over half a million dollars in an outpouring of support so that Klein can go on a “vacation.” That’s going to be one hell of a vacation for someone who’s worked a relatively low-paying job for a long time. The Internet can be pretty awesome sometimes 🙂

June 22, 2012
Why Won't the IRS Crack Down on Churches That Endorse Political Candidates?
Next Post

June 22, 2012 Who Needs a Wall of Separation...?
Browse Our Archives
What Are Your Thoughts?leave a comment