A Review of Evolving: The Human Effect and Why It Matters by Daniel J. Fairbanks June 20, 2012 Tessa de Leeuw

A Review of Evolving: The Human Effect and Why It Matters by Daniel J. Fairbanks

From our own experience, most of us realize it is all but impossible to convince the believers that they are wrong, despite the staggering evidence against their claim. We need to educate ourselves and our children. We’re small now but we can become the majority, right? Alas, according to the poll, the views on how we came to be have not changed much since 1982… which means the already-slow route could take a while.

Last month, Daniel J. Fairbanks‘ book about human evolution, Evolving: The Human Effect and Why It Matters, was released. The last part of that title is what counts. Fairbanks explains human evolution in great detail, citing many sources, while still telling a riveting story. He also explains why it is important that we know where we came from, why it is important to understand that we, too, evolved, and how we were not just “poofed” into existence by a supernatural being. 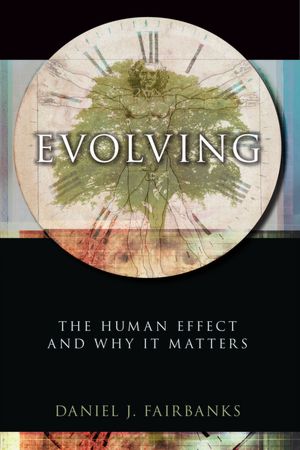 Fairbanks refers to an earlier Gallup poll, conducted in 2010 which had similar results to the one that came out this year. He goes on to explain how the worldview of this large minority clinging to Creationism shapes American education and politics. There’s plenty of science in here as well. Fairbanks makes clear in the introduction that he will not try to debunk Creationism; rather, he shows through evidence we can see today that humans have evolved over millions of years and that God had very little to do with that.

The book is well writen and extremely thorough. It takes the reader through the many forms of evidence we have for our own evolution. Fairbanks starts with an explanation of what exactly evolution is, then goes on to show evidence from our bodies, evidence from the Earth, evidence from geology, and evidence from our genome. The final three chapters are reserved for what evolution means for our health, our food, and our environment. Even with all this detailed information, the book hardly ever gets boring or dry. The chapters on the human genome can be a bit befuddling, but the overall gist is never far from sight.

The language is easy and not too technical. And every once in a while there is a quite beautiful turn of phrase. One that stuck with me was this:

Use of the word overwhelming to describe the accumulated evidence of human evolution borders on understatement.

The sentence flows beautifully and has a powerful way of telling the reader the evidence for what you are about to read is abundant.

In the chapter on what evolution is, Fairbanks explains the word “theory.” He shouldn’t have to, but to many believers, the main argument against evolution is that it is “just a theory.” Fairbanks’ answer to this is as follows:

Scientifically, evolution is both a fact and a theory. It is a fact in the sense that many of its various components have been repeatedly observed and are so well documented that they can no longer be reasonably disputed. It is a theory in that the various facts, laws, and tested hypotheses bearing on evolution can be broadly explained as manifestations of the same overall process. The same can be said for other broad scientific theories. Substitute the words gravity or the atomic nature of matter for evolution in the preceding sentences of this paragraph, and the sentences become valid scientific expressions regarding these theories.

Fairbanks promised in the title not just to show the reader how we evolved, but also why it matters. He does this in the last three chapters, where he shows how our evolution has affected (and still affects) our health, our food and our environment. Not long ago, the blog Mental Floss gave its readers five signs that we are still evolving. They range from the fact that we drink milk even after we are weaned off of our mothers to the idea that blue eyes may have been a “sort of paternity test.”

Fairbanks, too, shows through examples that our evolution has not ended. He points out that diseases evolve to meet the challenge of our ever more powerful medicines, and that we are growing more resistant to diseases that would have killed us not too long ago. He explains how we helped and influenced the evolution of certain plants and animals to enhance our food supply. Through these enhancements it was possible for us to migrate to different lands and cultivate our food supply there. This, in turn, influenced the environment, which had its own influence on our evolution.

We need this book and many more like it to further educate ourselves and our children. I reviewed another book on evolution — BANG!: How We Came To Be by Michael Rubino — for this blog and concluded that it was a great book to read with your young child when she asks where humans came from.

This book would be a great addition to your teenager’s curriculum. With so many Creationists in schools and the government, parents need to supplement their children’s education. Read this book because it is interesting and educational. Then read it with your child, so they, too, have a solid basis from which to venture into our world.