The Kennesaw State University Atheists United group (in Atlanta, Georgia) has a lot of big events coming up. As any group would do, they’re advertising the events via flyers on campus.

On Sunday, someone sent a picture of one of the flyers with what appears to be an honest-to-goodness bloody cross on it to the Twitter account of KSU Atheists United: 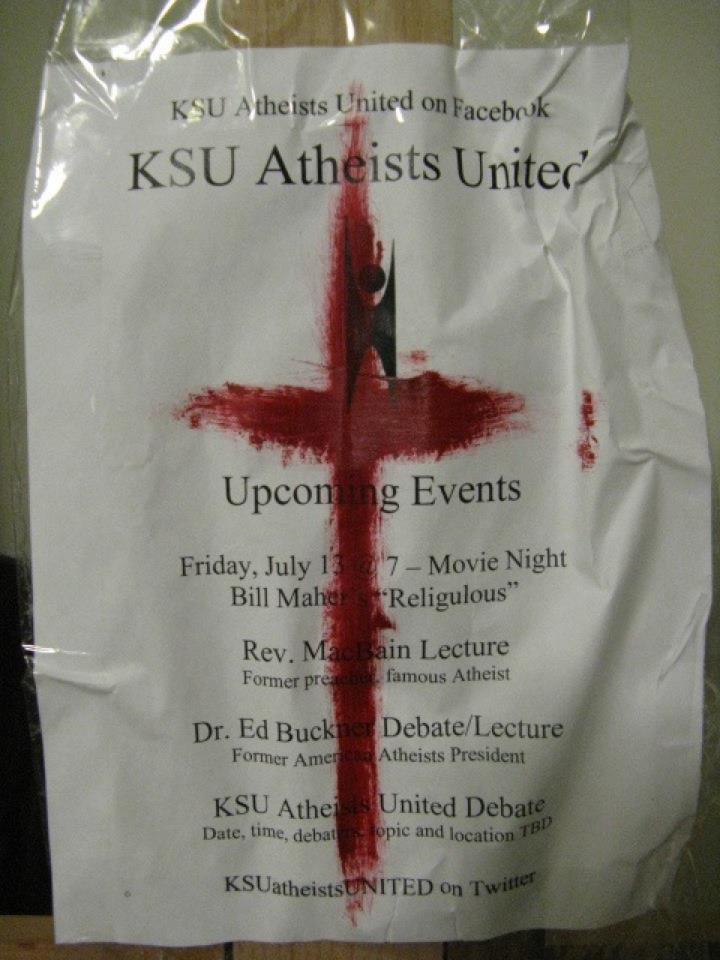 The KSU group bravely responded with this:

The sender seems to think that their red cross is something to fear. Well, I assure you that you will not deter us, you will not stop us, we are coming strong. Watch us.

This may be a prank. It may be one asshole trying to scare them off. But just to be safe, the KSU group reported the incident to the campus police and their dean. It was the right move. If it’s discovered that a student did it, that student will be expelled. (I’m not sure if the person who tweeted the picture is a student, the person who put the cross on the flyers, or someone who just wanted to frighten the atheists.)

The same person then sent them a picture of several (clean) flyers on a bedspread, suggesting that he was ripping them down.

Again, it didn’t stop the atheists. The KSU group can just put more flyers up. It costs them money to buy the paper and print the copies, but still…

No group should have to put up with this kind of harassment. We wouldn’t stand for it if a Christian group were treated this way and we won’t stand for anyone to treat someone in our community this way. Let the KSU folks know you support them on Twitter and Facebook.

Or, better yet, help them defray the costs of printing/copying fliers by chipping in a few bucks (I’ll make sure the money gets to them, with proof, as always):

(Thanks to Teresa for the link!)

***Update***: If the commenter is correct that this is not a registered student group, I’ll hold on to the money until they are. It’s not too difficult to do. I never hand money directly to any of the recipients of fundraisers on this site.

June 19, 2012
How Dare You Threaten Me with Your Harmless Opinion?
Next Post

June 19, 2012 In a Town Full of Christians, Holding a 'Lottery' to Decide on a Holiday Display Isn't Right
Browse Our Archives
What Are Your Thoughts?leave a comment