A three-year-old girl named Emily Thomas has had major health problems her whole life, but things got worse this month:

At 10 days old, baby Emily suffered a stroke as a result of an MRSA staph infection that spread to her blood. She was left legally blind, brain damaged and with cerebral palsy.

About two weeks ago, a common cold almost suffocated Emily. From their home in Tyler, Emily was flown by plane to Children’s Medical Center, where her mother has made a difficult decision.

A permanent tracheotomy — a hole in Emily’s neck — will give her the ability to breathe. But, the procedure to be done Tuesday afternoon will rob her of her voice.

There were some complications with the procedure, but you’ll be happy to know that Emily’s now doing really well and breathing on her own:

So why am I posting about it?

Because I glanced at the comments on the news website… 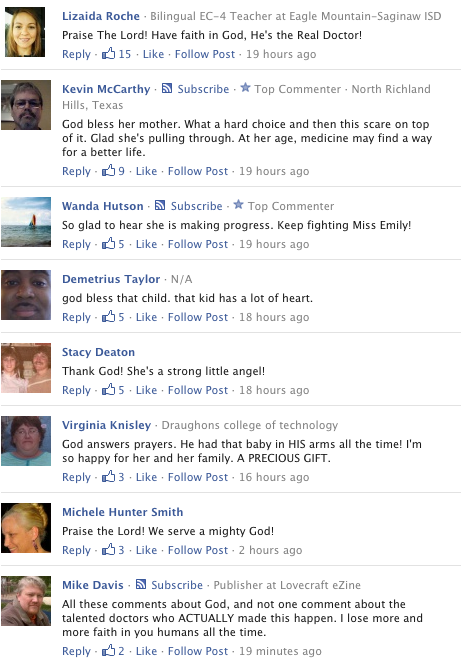 At least the last one was made by someone with the good sense to thank the doctors.

June 15, 2012
Another Church Sex Scandal... but It's Not What You're Expecting
Next Post

June 15, 2012 When Atheism and Math Collide...
Browse Our Archives
What Are Your Thoughts?leave a comment