Another Church Sex Scandal… but It’s Not What You’re Expecting June 15, 2012 Hemant Mehta

The most surprisingly part of the story?

It has nothing to do with the Catholic Church: 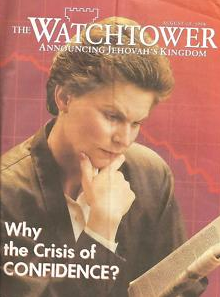 The woman sued Watchtower, the Fremont, Calif., congregation of Jehovah’s Witnesses and Kendrick in 2011. She contended church elders acting under the authority of Watchtower knew about the risk of child sex abuse in their midst but kept it secret.

The lawsuit alleged that Watchtower had a policy that instructed elders in its Jehovah’s Witnesses congregations to keep reports of child sex abusers within the religious group secret to avoid lawsuits.

“I once wanted to be the best Jehovah’s Witness I could be. Now I feel I’m doing more to help other children in Jehovah’s Witnesses than I ever did walking door to door to spread the ‘good news,’” the woman said in a news release issued by [attorney Rick] Simons.

The woman added that she tried to get the Jehovah’s Witnesses in Southern California and in Fremont to change their policy but they wouldn’t listen to her. Suing them publicly was the best way she knew to expose them.

It worked. Let’s hope more people abused by JW leaders now have the courage to go public with their stories.

June 15, 2012 Girl Survives Complicated Surgery... So Guess Who's Getting Credit?
"All the more reason to rebalance and enlarge the Supreme Court!Republicans forfeited any appeal to ..."
(((GC))) What Message Did Biden’s Religious Inauguration ..."
"Fair point. Ugh, speaking of things that need overhaul in the law books: goddamn paparazzi. ..."
NoOne of Consequence Arsonist Burns Down Church of Satan’s ..."
"So, why is this article here?"
CoastalMaineBird Update: BC Supreme Court Rejects Parental ..."
"You'll probably have better luck passing that info along via email."
WallofSleep Arsonist Burns Down Church of Satan’s ..."
Browse Our Archives
What Are Your Thoughts?leave a comment