Vyckie Garrison wishes she “had more middle fingers with which to express my extreme irritation” at this article written by Darcy Ingraham, and I am more than happy to loan my own middle fingers for the cause. The article itself, which I feel no need to take down on my own, since Garrison has already done it in a thorough and brutal fashion, is simply a collection of Christianisms and word-salad about the importance of maintaining a relationship with God despite the difficulties inherent in the lot He has given you. Instead of offering actual help and advice to people in dangerously scary and notoriously difficult circumstances, the author gives the sort of advice that you might dispense to a small child having playground spats with a young bully (not to downplay the seriousness of schoolyard bullying, but the situations are wildly different and deserve very different attention and action).

To begin with the author assumes that only those husbands who abandon their faith become angry, bitter, and abusive — and she offers no help for women whose abusive husbands are fully committed Christians acting in accordance with patriarchal teachings derived from the bible; she quotes random bible verses out of context to convince abused women that they are safe from actual violent abuse so long as they remain close to God; she appears to believe a woman’s display of piety (praying out loud for her abuser and telling him that she is giving him over to the Lord, for example) is the way to truly intimidate her abusive husband and get him to back off; she advises victims not to “make the abuse worse” by reacting to their abusers’ anger (followed by the whiplash-inducing about-face when she admonishes victims to never allow anyone to convince you that the abuse is your fault); and to top it all off, the author encourages abuse victims to take charge of their lives by finding a hobby.”

Nothing but patronizing and wrong-headed advice that puts women more in danger rather than mitigating it. I can’t imagine that an abuser would be particularly receptive to the victim praying aloud for the behavior to stop, for them to learn the error of their ways.

This quote, from the original article, brings up even more questions.

No one wants to be in an abusive marriage, but if you are a Christian woman the decision to leave or stay is not yours alone. The Lord has a plan for you and if you seek His wisdom, He will show you the way. Just know that if He leads you to remain in the marriage, He will be your strength. In “Our Daily Bread” by RBC Ministries, this sentence brings it home. “Assignments from God always include His enablement.”

Ultimately, this is where things really fall apart. In many Christian denominations, women are taught, often explicitly, that valuing themselves and their personal well-being is sinful. Instead, they are taught to submit, submit, submit — first to God, second to their husbands, third to the needs of their children (if they have any). This means that many women in abusive situations must navigate the needs and desires of an imaginary being, then the abuser, then the children, and finally, maybe, themselves.

Garrison says it better this way:

The question which the victim asks herself is no longer, “He is hurting me — what should I do?” — instead, it becomes, “He is hurting me, but God loves me and He knows what is best for my life — if I take matters into my own hands, am I really trusting the Lord?

Maybe I just need to have more faith and to be long-suffering and try to submit more wholeheartedly and sincerely? What would Jesus do? Would he defend himself? Would he give up and walk away? Would he withhold his love and forgiveness?… and on and on and around and around… until the woman is thoroughly overwhelmed and paralyzed by indecision. She cannot even say for sure whether or not she’s being abused, and she never gets around to addressing the only truly relevant question: What should I do?”

Now, to be fair, I don’t personally know any churches that explicitly teach or preach that women should stay in abusive relationships, but I don’t know of any church that doesn’t preach some version of submission of women. When I think in terms of doctrine, particularly when Christianity is so divided and so varied, I tend to think of it in terms of variations on a theme. Here, the theme is submission, and the interpretations run the gamut, just like anything else.

The problem is, of course, that, though moderate Christians would decry the practice of teaching victims to stay with the abuser, they won’t question and discard the underlying dogma. And, lest you would be so hopeful as to assume that this is relegated to fundamentalist or evangelical culture, here’s a screencap of the Facebook page of The Crossing church, snagged by Stephanie Drury of Stuff Christian Culture Likes (unsurprisingly, the post was taken down when they started getting complaints from members of the SCCL Facebook group, and maybe, possibly began to realize how horrible it was. Or they were just trying to clean up an imminent PR nightmare… take your pick.) 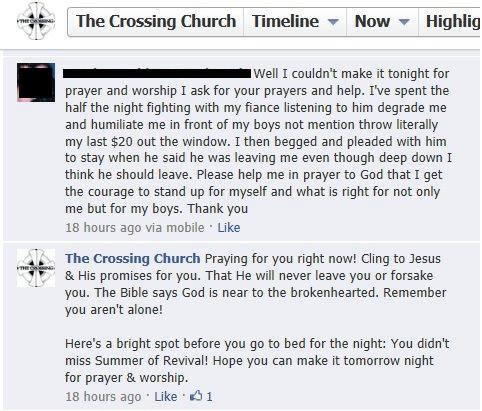 “Hip” mega-churches doing mega-awful things and then taking every opportunity to promote themselves… who would have guessed?

I’m kind of with Vyckie on this one; all my middle fingers are spoken for at the moment, and still it’s not enough to express my disgust and rage, for all the people who have suffered at the hands of abusive Christian parents, for all of the women who have been taught that violence directed toward them is simply “their cross to bear,” for all of the men who have missed out on the beauty, joy, and excitement of an egalitarian relationship founded on respect. It is my hope that one day Christian women, even if they never develop an evidence-based world-view, will be able to laugh, darkly, knowingly, back at the archaic time when they weren’t even in the top three of their own priority lists.