Here’s a bad idea for an assignment If you’re teaching a history class: Draw a recruitment poster to enlist soldiers who can fight in the Crusades. You’re only asking for trouble…

Here’s a hilarious idea if you’re a student: Draw a picture of Jesus (a la Uncle Sam) saying “I want you to kill all infidels!”

Here’s a really bad idea if you’re the school: Display that poster so everyone can see it.

That’s what went down at Hamilton Elementary School in Central Fresno, California: 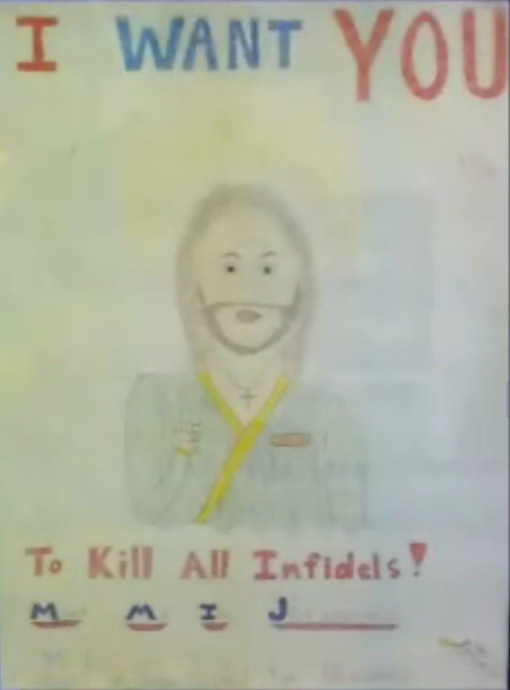 In the picture, you can see a man wearing a Jesus name tag, with the caption, “I want you to kill all infidels.” Below, the phrases: “meet me in Jerusalem” and “get a free ticket to heaven.” The artwork is one of several drawings in a display case inside the main lobby at Hamilton Elementary.

But those enemies of mine who did not want me to be king over them — bring them here and kill them in front of me.

(Edit: Joe Zamecki points out that Jesus was quoting someone else in that passage. My apologies for the error.)

In any case, some parents are freaking out.

Parent, Chris Alfaro said, “I do believe common sense tells you, hey this may not be appropriate for a k through 8 school, right in the main lobby where each child passes on their way to school and home.” Chris Alfaro is Christian and has a second-grade daughter at Hamilton. His wife first noticed the drawing in early March. But according to him, when she called the office to complain, no one made an effort to address her concerns. He claims, “The aide said something along the lines of I’ll see what I can do, and then hung up the phone.”

“The picture itself I feel goes against everything Christianity stands for.”

Because, as we all know, Christianity would never be associated with anything evil… (The Crusades were Islamic, right?)

Isn’t that one of the purposes of the assignment, though? To show that a religion that constantly claims to be a good, kind, moral faith was once used for evil? (Hell, it’s still used for evil now — just ask anyone who’s LGBT. Or female. Or supports church/state separation. Or accepts science. Or… you get the idea.) Anyway, maybe that conversation is beyond the reach for a 7th grade class, but the poster doesn’t strike me as offensive. It’s only displaying something from the Bible that most pastors never want to talk about.

What do the other posters look like, anyway? How do you recruit for a religious war without bringing religion into it?

(Thanks to Heather for the link!)

June 8, 2012 Glenn Beck's Website Has a Q&A with Todd Stiefel
Browse Our Archives
What Are Your Thoughts?leave a comment