A Rush Limbaugh For the Next Generation June 8, 2012 Jessica Bluemke

A Rush Limbaugh For the Next Generation

This is Caiden Cowger: 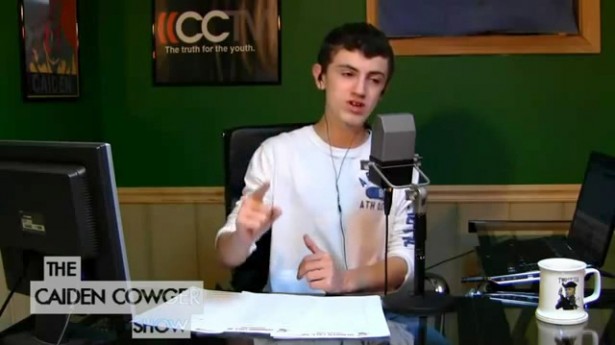 He has his own radio show and everything! Which seems cute… until you realize he’s a young gay basher.

When you listed to his twice-weekly internet talk show based out of West Virginia, you realize that Caiden doesn’t like gays.

Homosexuality is a belief.  It is a– it is not mandatory in that person.  That person is not born that way… no matter what Lady Gaga says.  That person is not born that way.  It is a decision… It’s getting worse where I’m at. I see younger people that is turning out to be homosexuals. It’s equal, boy and girl both.  All of them are starting to turn into homosexuals.  We’ve got about 30, I’d say 30 teenagers in this county that I’m at, that are homosexuals.  And it is sickening.  It sickens me. And… I knew these kids.  Some of them I was friends with.  I knew these teenagers when they were in elementary school.  I knew them when they were in the beginning of middle school.  And you know what?  They were not homosexuals.  They just decided all the sudden you know what “I think I am going to be gay!” Why they are becoming homosexuals, why they are becoming gay, is because they are being encouraged by it.

President Obama? “It’s alright, it’s ok, you were born that way! You know what? It gets better.”… Rather then saying, “You need to turn away from homosexuality. That is a perverted belief, and it is immoral.  And it’s not natural.”…  But rather than the president saying that, he is saying, “Homosexuals, you can get married!  And it’s alright! I mean, it’s alright to be gay.  We’ll make it better for you… It’ll be alright.”  See, I’m not for bullying homosexuals, I believe that is wrong.  But when you’re trying to teach them the word of God and they consider that bullying, yeah, I find that a big problem with not being allowed to convert other people to my religion and telling them it is wrong, homosexuality, the belief is condemned by God and you will go to Hell if you consider to follow this belief unless you repent.  It’s getting to the point where I can’t say that anymore.

This stupid Fairness West Virginia that is here in West Virginia?  There was this kid that was on there, I believe his name was Michael, who said there was a girl that came up to me and said, “We prayed for you in church.  We prayed that God would show you the light and you would turn away from your evil and wicked beliefs of homosexuality.” The kid made fun of that!  And then he came out as a victim, “Oh poor me, she hurt me, she hurt my feelings!” But all she was doing was basically, basically, she was witnessing to him.  But he took that as bullying.  He took that as bullying.

Guys, I’m going to tell you this.  When kids or teens are being basically indoctrinated and encouraged to follow homosexuality.  When the president said, “It’s all right, go ahead and be a homosexual.”  With the vice president, “It’s alright.  Be a homosexual.”  Barbara Boxer was on T.V. the other day, “It’s alright. I used to be against homosexuality.  But now I’ve changed. Now I’ve accepted the rainbow.”  I’m going to tell you this guys.  President Obama, Vice President Biden, is making kids gay. Obama… if you’re encouraging, you are making kids gay.  You are saying that it is alright to follow this belief, it is completely natural, there’s nothing wrong with it, it’s not immoral.  They are encouraging kids to think, “Well you know what? You know what? They are talking about being a homosexual, and they’re saying that there’s nothing wrong with being gay so you know what, I think I might try that out for a little bit.” [laughs] That’s what’s going on!

I can’t make this stuff up.

My initial reaction was, “This kid is 14. I said all sorts of stupid crap at 14. I should let this slide.”  But, then again, when I was 14, whatever nonsense I wanted to rattle on about was confined to my friends who were also 14.  This kid has an Internet radio show.  He’s trying to reach a wider audience. I say fair game.

First of all, his lack of understanding of what “bullying” is is astounding. He doesn’t believe in bullying “the homosexuals,” but he reserves his right to tell them that their lifestyle is wrong and that they are going to Hell for all of eternity if they don’t turn from their immoral, evil, wicked ways.  That’s some compassion right there.

I guess this is pretty indicative of the pure and utter ignorance that this kid has been taught.  He absolutely, sincerely believes that kids decide to be gay because Obama said it was okay, or because they are bored, or because it’s becoming more widely accepted in society.  And, boy, is he ever fuming about it.

It’s a good thing Caiden has his god to teach him that we need to love each another, or this kid might turn out to be an asshole one day.

June 8, 2012 Those Damn Atheist Cowards and Their Pseudonyms
Browse Our Archives
What Are Your Thoughts?leave a comment