In 2008, the American Religious Identification Survey released its results and they looked amazing for those of us who know better than to believe in god. The percentage of people categorizing themselves as having “no religion” went up in every state: 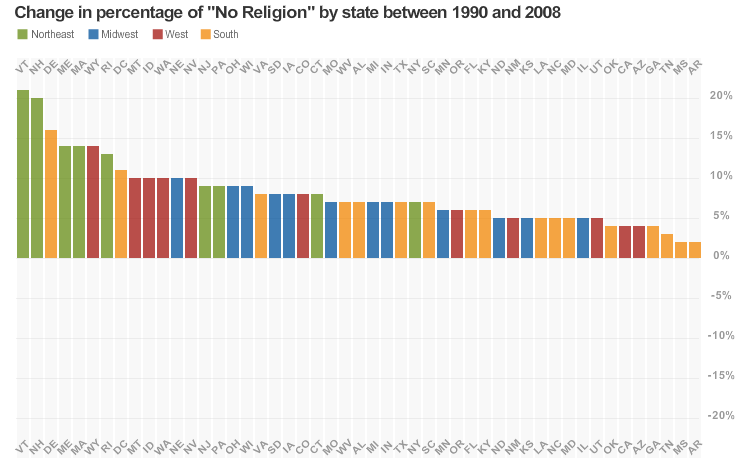 Now, Barry A. Kosmin & Juhem Navarro-Rivera have gone through the data specifically relating to Generation X (born 1965-1972). What has happened to that generation from 1990 (when the first ARIS study came out) to 2008?

Here’s what we know (PDF) when it comes to religious belief: They’re less likely to be Christian (especially Catholic) and more likely to list themselves as having no religious faith. Success!

Generation X became more secular and also less Christian (85% in 1990 v. 75% in 2008) as it aged and grew in size. However, the proportion of the cohort identifying with Other Christian denominations and non-Christian religions hardly changed. So the secularizing change mainly occurred at the expense of Catholic self-identification which fell from 33% in 1990 to 26% in 2008.

As far as actual numbers go, Christians are still in the majority, but there are significant shifts… 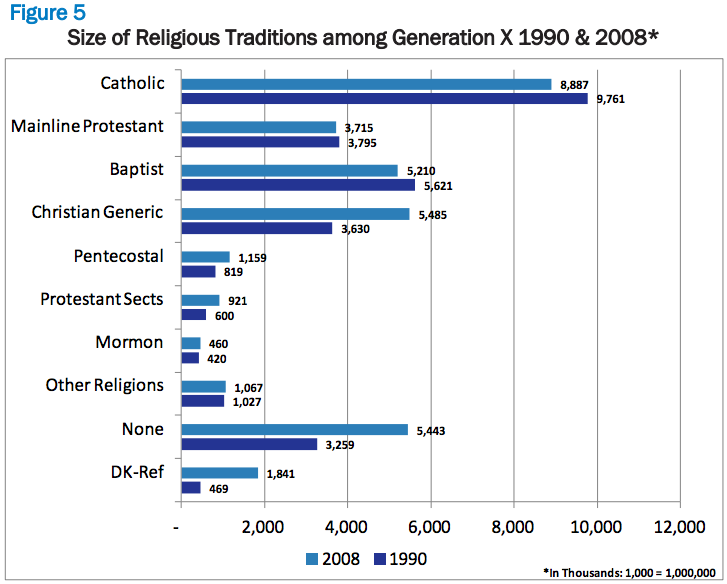 The only religious traditions to show major losses between 1990 and 2008 were the Baptists, with 400,000 fewer identifiers, and the Catholics, who had a net loss of lost nearly 900,000. The Catholic decline is a surprising and significant finding. Due to immigration, Generation X grew from 29 million in 1990 to over 34 million in 2008, and this large influx of newcomers included over 1 million Catholic Latinos. Yet the influx of these Catholic Latinos during the 1990s and 2000s was not enough to offset 1.7 million losses among white Catholics. This phenomenon of wide-scale disaffection among white Catholics explains why the Catholic share of the total U.S. population remained constant at 24% despite the fact that a significant share of immigrants over these two decades were Catholics.

It’s good news to see the rise of the “nones.” And I suspect that number’s only going to grow as you move to more recent generations.

June 7, 2012
High School Student Fights to Stay Seated During the Pledge of Allegiance... and Wins!
Next Post