How to Create Critical Thinkers: Nudge Them. June 7, 2012 Richard Wade

How to Create Critical Thinkers: Nudge Them.

On Tuesday, June 5th, the planet Venus appeared to move as a black dot across the face of the Sun from our vantage point on the Earth in what is called a “transit.” This is a very rare astronomical event, happening in pairs 8 years apart with long waits of 121 years or 105 years in between. It won’t occur again until 2117. The 1761 and 1769 transits of Venus were observed from distant places on the Earth, and using the principle of parallax, the distance from the Earth to the Sun was measured with greater accuracy than ever before. At that time, evidence was first observed indicating that Venus has an atmosphere. 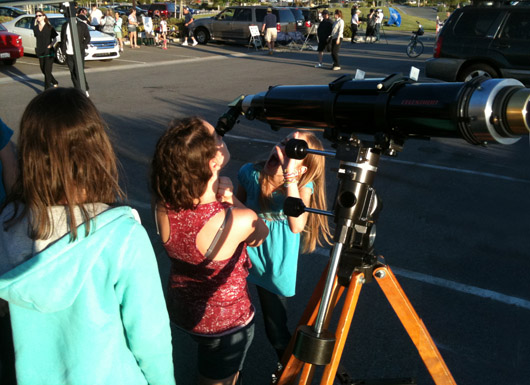 Here’s a professional photo that I altered to show the level of detail that they could see through my telescope. There were many interesting things in there to show them: 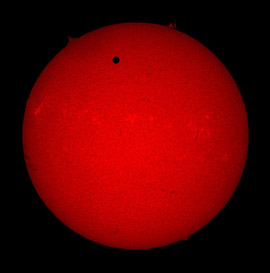 They don’t all suddenly dedicate their lives to the pursuit of scientific knowledge, but they’ve been nudged just a little more in that direction. Although most won’t become scientists themselves, they’ll be just a little more open to science, a little more appreciative of its great value and relevance to them and to humanity.

This is what I do, every chance I get. With live presentations, I get children excited about science by telling them about things that they already find fascinating, such as dinosaurs, volcanoes, and astronomy. But I don’t just tell them what science knows, I show them how science knows. I make it fun for them so that learning and pleasure become linked in their minds.

So I travel around like Johnny Appleseed, planting seeds that I won’t live long enough to see sprout, but if even just a small percentage of the many thousands of kids I entertain in this way are nudged a little more toward critical thinking, rationality, and science, then for me, my efforts and my life have very satisfying meaning and purpose.

Anyone can do this. We’re surrounded by young people with minds like sponges. Their brains are always hungry like their stomachs. We can nudge them. Don’t just do this for your own kids; be a neighborhood Johnny Appleseed. Give the youngster across the street a loupe, the best little scientist maker ever. It’s cheap and simple, and he or she can carry it everywhere in a pocket. Show them the magnified sawtooth edge of a leaf, or the awesome beauty and “fearful symmetry” of a dead bug, and then let them go explore their world with with a magnified wonder they’ll never forget. Got an inexpensive fossil knocking around? You’ve enjoyed it enough; give it to the youngster next door. Or a small cut geode, or a chunk of lava. Tell them a short, interesting story about where it came from. Leave behind a legacy of planted seeds that you might not live to witness sprouting, but remembering that seeds were cast in your direction years ago.

And they still are.

June 7, 2012 Could Kansas be at the Center of Another War on Science?
Browse Our Archives
What Are Your Thoughts?leave a comment