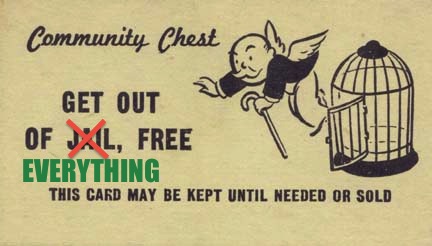 Over at the Center for Inquiry, we’re trying to get a little more attention for a very troubling development in North Dakota, and I’m hoping against hope that the Friendly Atheist readership in the Roughrider State is huge. For the sake of my sanity, I will presume this to be the case.

Listen: There is a ballot measure to be voted on on June 12th being pimped as a “religious liberty” amendment to the state’s constitution, not terribly unlike the “right to pray” bamboozle being sold (falsely) to the voters in Missouri.

Like that bill, the North Dakota initiative, known as Measure 3, seems to be redundant, asserting in predictably stodgy language that people can practice and believe in their religion without the state getting in their way. Sounds harmless.

But Measure 3 is much worse, in that it can (and almost certainly will) be construed to make religious belief a get-out-of-following-the-law-free card in any number of circumstances. First, here’s the meat of the measure itself:

Government may not burden a person’s or religious organization’s religious liberty. The right to act or refuse to act in a manner motivated by a sincerely held religious belief may not be burdened unless the government proves it has a compelling governmental interest in infringing the specific act or refusal to act and has used the least restrictive means to further that interest. A burden includes indirect burdens such as withholding benefits, assessing penalties, or an exclusion from programs or access to facilities.

At the website Verdict, there is an excellent analysis by Marci A. Hamilton of why the use of the word “burden” is so key. (And you should read the entire piece.)

The typical formula these laws set forth goes as follows:

1. To obtain the benefits of a RFRA statute, the believer or organization first must carry a burden to prove that the law imposes a “substantial burden” on religious practice;

2. Then, if the believer can prove a substantial burden, the burden shifts to the government to prove that the law “serves a compelling interest” and is the “least restrictive means” to accomplish that interest.  If the government fails to justify its law under this strictest of standards, the religious actor is not required to abide by the law.

With Measure 3, the word “substantial” is gone. Now, any “burden” will do. It’s going to be very easy for someone to avoid compliance with laws usually applicable to everybody if they can just play their religion card. As Hamilton reminds us in her piece:

…this is a zero-sum game.  When the religious actor gets more latitude to break the law, the persons whom that law was intended to protect lose that protection.

NPR just did a report on this measure (thank goodness) and they lay out the possible harms, including — perhaps most disturbingly — protecting the mistreatment of children under the auspices of religion. Another possible outcome is a blank check for employment discrimination.

From the NPR piece:

Renee Stromme of the North Dakota Women’s Network agrees, saying… “An employer could use religious beliefs to fire a pregnant woman because she is unmarried… So let’s think that through: We now have a single mother, unemployed, struggling to make ends meet, to care for the welfare of her family — and her employer would have a protected defense for his action. And a judge would have to determine otherwise.”

And just off the top of my head, I can think of other implications such as avoiding paying taxes, screwing with science education, and protections for bullying and harassment.

In short, it’s important that North Dakotans reject this measure, both for their own sake and so that this kind of thing doesn’t gain any momentum to crop up in other states.

So if you know folks in North Dakota, let them know they need to vote against Measure 3. Share our recent notice from CFI’s Office of Public Policy. Make sure they know that this is not flowery, harmless language, but a real threat to church-state separation and to equality under the law.

And how hard could it be? There aren’t all that many people in North Dakota to begin with, right? Get on this.

June 6, 2012
Could America's First and Only Openly-Atheist Congressperson Lose His Seat This November?
Next Post