Atheist Billboard Comes Down in Ohio After a Christian Complains June 1, 2012 Hemant Mehta

Atheist Billboard Comes Down in Ohio After a Christian Complains

Last month, a few different billboards for the Mid Ohio Atheists went up in the city of Mansfield:

Incredibly, that middle one turned out to be the most offensive.

Today we received the news that the owner of the land where one of our billboards was placed has threatened to cancel his lease with Lamar if they do not take down our billboard. Had I been forced to guess which one of the three we put up people would find most offensive and which one we would be forced to take down I would have been wrong. Apparently what people fear the most in Mansfield Ohio is not being told there is no God or that God is an invention of man. No my friends what they fear more than those two messages was a message encouraging the use of reason over faith.

So this baby came down yesterday with a week left on the contract: 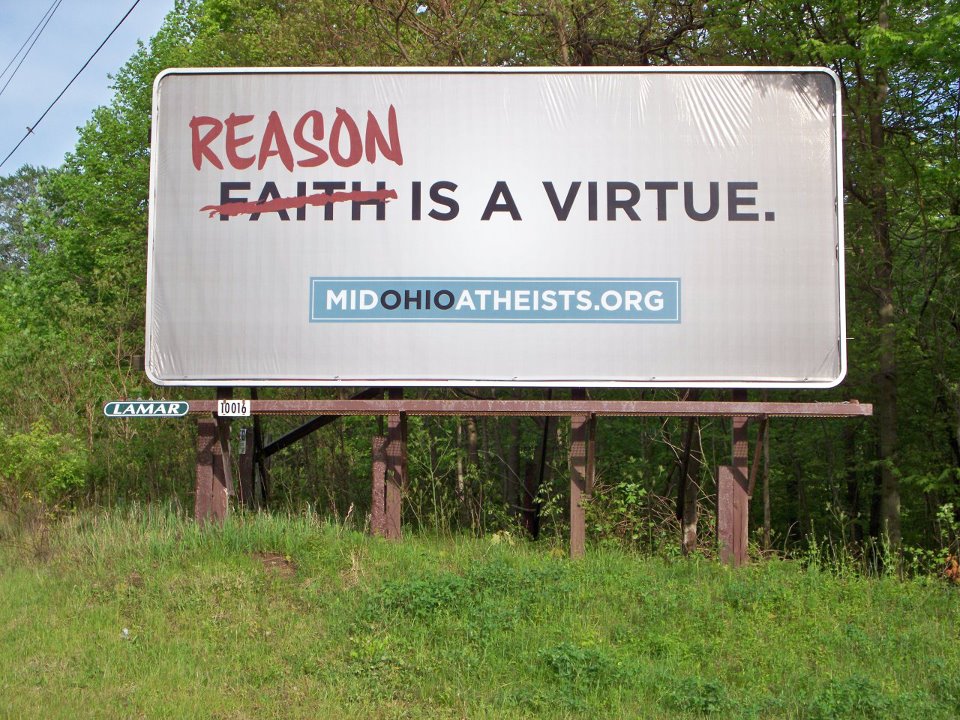 To their credit, Lamar Advertising offered the atheist group an extra week on one of their other billboards or money back for the time owed on this one.

Michael from the group informs me that, this complaint notwithstanding, the reaction to the billboards has been pretty positive overall:

We’ve gotten messages, emails, and tweets from people all over Ohio. Most were happy to find out our group exists and many more were looking for local groups in their areas. We were able to point quite a few people to their local groups and make contact with a lot of local people.

So at least everyone isn’t offended by the suggestion that reason is a good thing.

May 31, 2012
Cardinal Dolan Authorized Payments of $20,000 to Abusive Priests if They Quietly Left the Church
Next Post

June 1, 2012 Gallup Poll: 46% of Americans Are Creationists
Browse Our Archives
What Are Your Thoughts?leave a comment