Bad Reasons to Change Your Last Name After Marriage May 31, 2012 Hemant Mehta

Bad Reasons to Change Your Last Name After Marriage

We can debate whether or not it’s a good idea to change your last name after you get married, but Andrée Seu Peterson at World Magazine (a Christian publication) explains how she changed her name after having a talk with her husband:

When nothing else was working my true love said to me, “Andrée, ultimately I’m not that important to you.” It was the last resort in a drawn out drama and it did the trick. Stunned like a wailing child by a well-placed swat, I straightened up and surveyed the new terrain.

Libby Anne is stunned (but not surprised) for a few reasons. Here’s just one of them:

First of all, of course, is the glaring double standard. If changing her name to his is necessary to show that he is “important” to her, then why is the reverse not true? Why should Andree’s fiance expect her to change her name to his without ever considering changing his name to hers? How is her refusing to change her name a sign that she is uncaring while his not even considering changing his name means nothing of the sort?

Ultimately, it should be each person’s decision what to do. It’s not mandatory for one person in the couple to change his/her last name. And it’s not a bad thing if you decide to do it, either. But the belief that you’re not really in love if you don’t do it is crazy. 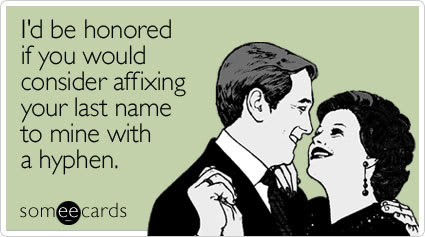 Libby Anne changed her name — on her own terms — but this article was a flashback to a time she lived under the patriarchal rule that evangelical Christians love to promote:

If only everyone knew they had that choice.

***Update (9/12/12)***: The author’s husband has responded to this post (and Libby Anne’s), calling it all a big misunderstanding. Libby Anne has quoted him on her site so I’ll just send you there.

May 31, 2012
Who is Whining About Contraception Now?
Next Post

May 31, 2012 An Update to the Christian Church's Billboard in North Carolina
Browse Our Archives
What Are Your Thoughts?leave a comment