A Former Atheist-in-the-Pulpit Delivers a Sermon May 29, 2012 Hemant Mehta

A Former Atheist-in-the-Pulpit Delivers a Sermon

Catherine Dunphy was trained as a Roman Catholic Chaplain before becoming an atheist, and she is now a graduate and board member of The Clergy Project. On May 6th, she delivered the following sermon about her deconversion at West Hill United Church (a relatively Humanistic church) in Toronto, Ontario. 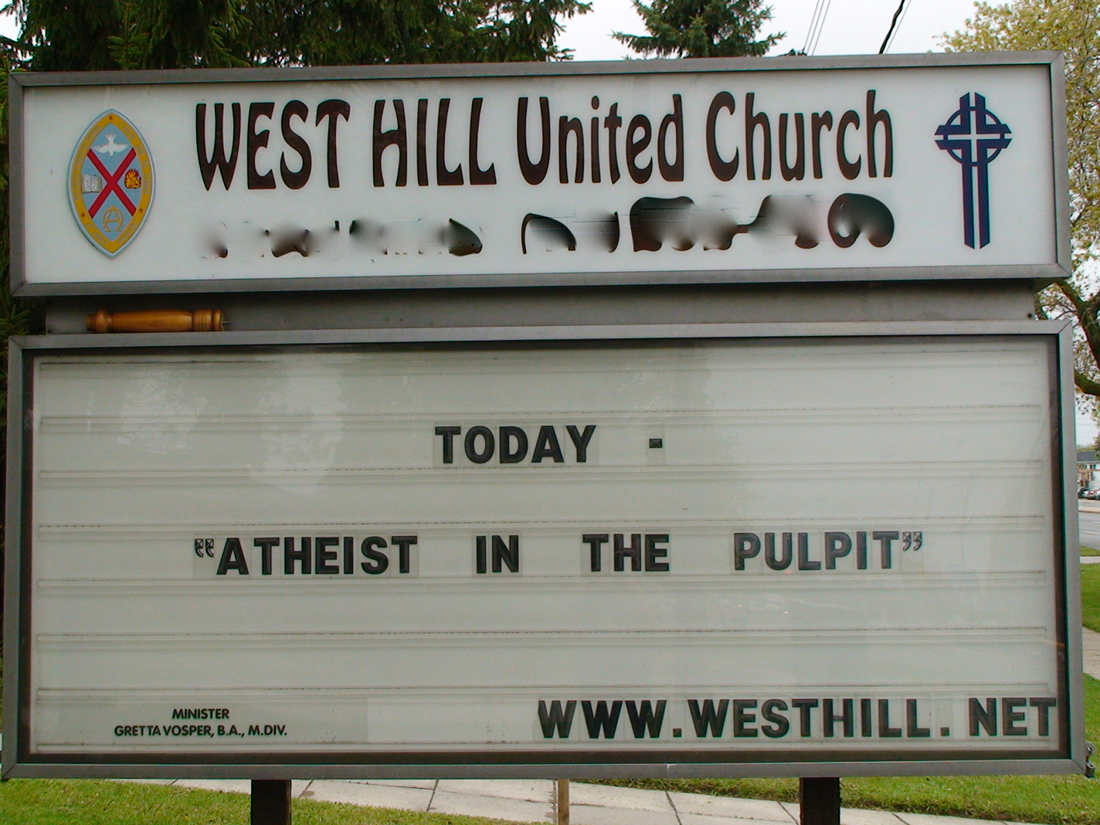 I would like to take this opportunity to thank you all for inviting me to spend this Sunday at West Hill — and for graciously welcoming me. The theme for today’s service is about awakening and new birth, but I am also going to speak about values, as well as a project that is very special to me.

A bit about me — I am a graduate of a Christian seminary and it was during my studies that I began to question my belief in god. It is a bit of a conundrum, that despite the obvious goals of educating religious leaders, most seminaries allow for diversity of theological perspectives; many radically unorthodox.

It should be no surprise then, that by the time I graduated I had let go of god and all the theistic concepts that go along with it. It has only been since about November 2011 that I knew there were other people like me. People who were once ardent believers and now have embraced an atheistic or humanistic worldview. This group that I speak of is called the Clergy Project.

The Clergy Project provides an online safe house for unbelieving religious leaders of every persuasion. Inside the virtual walls of our site we are free to interact, to share our stories, to find community, and to marvel at the charade of traditional religions that have so successfully bullied and dictated the functioning of humanity.

When I first became a member of this community, the most amazing thing was to know that I was not the only one. For many years after completing my degree I felt like I was somehow “defective,” as I had to be the only person who went through seminary and came out an atheist. I now know better.

Knowing that the Clergy Project and its members exist may be unsettling to some believers. We may be seen as leaders who have lost their way, or as trouble makers — whatever the opinion, it was the ability to reason that led each of our members to this community. Now we’re working together to create awareness of our existence, to communicate our values and to support our members who need our help in getting out of active ministry.

When it comes to the Clergy Project, we are witnessing the birth of a new grassroots community, which fits in well with the change in season and the theme of rebirth and awakening.

I am always excited this time of year as I see the world once again in bloom, hear the birds chattering and smell that first spring rain. Everything seems so ripe of possibilities and optimism.
 
I searched a while for a reading that spoke to this feeling, but that also took into account my position as an atheist. Though I have come to accept that our existence is fortuitous I do believe that we are instrumental in creating well-being for ourselves, our families, and our communities.

The reading that I chose for today by Salman Rushdie, I think speaks well to this dichotomy. Despite, its apparent lack of “warm fuzzies” it does inspire and challenge me. When he asks how do we live? And what is right action, and what is wrong? He masterfully calls us to think for ourselves and embrace the articulation of life in all its diversity and see it as it is: A responsibility.

His words challenge me to marvel in the reality of our existence, to know that nothing is ever easy and that we should cherish our opportunity to cross the stage of life!

Physicist Lawrence Krauss said, “Every atom in your body came from a star that exploded. And the atoms in your left hand probably came from a different star than your right hand. It really is the most poetic thing I know about physics: You are all stardust. You couldn’t be here if stars hadn’t exploded, because the elements — the carbon, nitrogen, oxygen, iron, all the things that matter for evolution and for life — weren’t created at the beginning of time. They were created in the nuclear furnaces of stars, and the only way for them to get into your body is if those stars were kind enough to explode.”

Life is not a story of the mundane; it is a radically challenging opportunity for awareness. In this awareness, we learn not only about the nature of our universe and the truly cosmic events that got this billion year old journey on a roll — but also, we learn about ourselves by narrowing our focus to the tangible relationships and life experiences that we each encounter.

… Speaking of which, I want to tell you a little bit more about my friends in the Clergy Project.

The Clergy Project has existed for just over a year and in that short time we have done what has come natural. We have reached out to one another, embracing our diversity and sameness. Because of this support our members who have recently come out have been doing some tremendous things.

My good friend Jerry DeWitt is a former Pentecostal Minister, who not only left the atheist closet, but flung the door wide. Jerry details how his thinking about god changed;

Now that Jerry is out, he has become one of the most vocal members of the Clergy Project. His gregarious nature and his optimism speak to the potential that non-believing clergy have, as well as the opportunity that this community has for impacting the status quo.

There is also Teresa MacBain, a newly minted former minister, and Clergy Project Executive Director, who is working hard to promote our group and to draw attention to the unique challenges that unbelieving clergy face when they leave active ministry.

We also have our supporters, who have, through their efforts, made the Clergy Project possible. Specifically, Dan Dennett and Linda LaScola, who published the ground breaking Tufts study, “Preachers who are Not Believers” (PDF). As well, we owe a great debt to Richard Dawkins and Dan Barker, who have both championed the Clergy Project.

Given this convergence of people and values, it is not surprising that I keep hearing from the members of the Clergy Project that “the time is ripe” for taking a stand, for building a community! It is hard work to cultivate something new, but when you’re inspired it makes the work invigorating!

During this time of year, when new growth is erupting all around us, I think it is only normal that we feel summoned into action. As the Earth tilts and the northern hemisphere once again emerges from hibernation awakened by the sun, it is time to get our hands dirty! Whatever our passion or motivation, now is the time to cultivate it!

A wise old nun from the 12th century once wrote, “Human beings cannot live without the rest of nature; they must care for all natural things.”

Our species are caretakers. That is how we survived and how we thrive, whether that be as gardeners, parents, students, or former clergy — each of us playing a part in this our human story.

May 28, 2012
Christian Group: If You Don't Let Us Put Up Religious Monuments on Public Land, You Must Hate the Troops
Next Post

May 29, 2012 'God is Working' on Getting Gays to Heaven
Browse Our Archives
What Are Your Thoughts?leave a comment