NAACP Comes Out In Support of Today’s Civil Rights Movement

The NAACP announced Saturday that they now endorse marriage equality.

The National Assn. for the Advancement of Colored People passed a resolution supporting gay marriage at a meeting of its board of directors in Miami, saying it opposed any policy or legislative initiative that “seeks to codify discrimination or hatred into the law or to remove the constitutional rights of LGBT citizens.”

This is the right move for the country’s oldest civil rights organization and it follows closely behind President Obama‘s support of same-sex marriage.

But the NAACP was quickly criticized by many church leaders in the black community. Many were already angry with Obama for his comments and now they’ve turned their focus on the NAACP as well.

Rev. Anthony Evans, with the National Black Church Initiative, opposed the president’s and the NAACP’s endorsements of same-sex marriage. He warned that Obama and the NAACP will lose support among black churches for their stand.

“We love our gay brothers and sisters, but the black church will never support gay marriage,” Evans said. “It is and always will be against the ethics and teaching of our Lord Jesus Christ.”

But not all black churches are opposed to gay marriage. Rev. Enoch Fuzz of Corinthian Missionary Baptist Church used Sunday’s sermon to explain why he, too, supports gay marriage. Like the President, he had a change of heart after long reflection.

“I know many in the black community have trouble accepting gay marriage,” he said. “But all of us have gay friends or family, and we love them.” 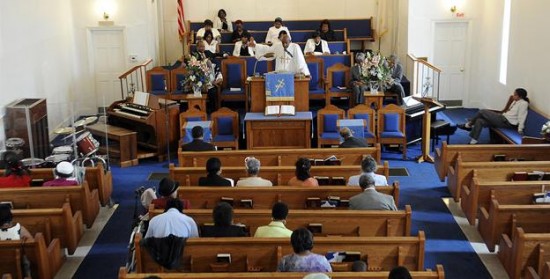 The tide is changing bit by bit in the black community regarding marriage equality.

In Columbus, Mayor Michael Coleman is confident black churches and voters will stick with the president, even if they disagree over gay marriage. The four-term African-American mayor made the same conversion himself on the issue of gay marriage — for the same reasons — this year.

“I had to evolve on the issue and think it through, too, and I came to the conclusion it was the right thing,” said Coleman, a Democrat who supports Obama. “When it is the right thing to do, politics is irrelevant.”

And it is the right thing to do. Love could never be a sin, even if their god did exist.

May 23, 2012
American Humanist Association Ads Go Up in New Orleans
Next Post

May 23, 2012 I'm Still Awaiting the Update
Browse Our Archives
What Are Your Thoughts?leave a comment