Bill Donohue is So Mad at The Daily Show May 22, 2012 Jessica Bluemke

Bill Donohue is So Mad at The Daily Show

I am a massive fan of Jon Stewart‘s The Daily Show.  I try to catch every episode, and I think Stewart is consistently on point and relevant.   Shockingly, the Catholic League and I do not agree on this.

On April 16th, The Daily Show featured an amazing send-up of Fox News Channel’s protest of the term “War on Women”:

At the 4:50 mark, Stewart wondered if there was anything women could do to elicit the outrage over their bodily rights that Fox News correspondents typically reserve for, say, attacks on Christmas.  “Perhaps women could protect their reproductive organs from unwanted medical intrusions with Vagina Mangers.” Behind him, as he spoke, appeared an image of a woman with her legs spread and a manger scene covering her …mistletoe?  (Nutcracker? Holiest of Holes? Virgin Mary?  Secret Santa? Pick your favorite vagina euphemism.  Or come up with your own!  Fun for the whole family!) 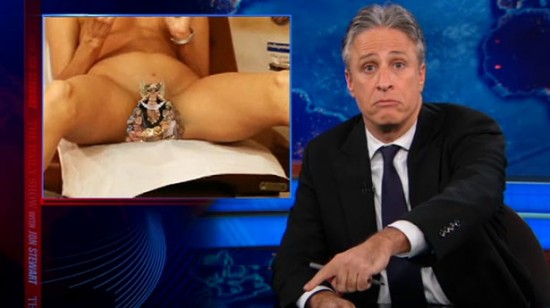 Anyway, to the surprise of no one, Bill Donohue didn’t think this was funny.  At all.  In fact he called it “hate speech.”

With all of his muster, he called for advertisers of The Daily Show to pull their sponsorship.

For a quick reminder, when Rush Limbaugh defamed Sandra Fluke over a period of several days, the list of advertisers that pulled sponsorship looked like this:

When Donohue and the Catholic League called for sponsors to abandon The Daily Show, the list read like this:

Notably, when The Catholic League sent a complaint to Kellogg’s, a major sponsor of the show, they responded with this:

We understand that our customers come from a variety of backgrounds, experiences, lifestyles, and cultures and we respect their individual decisions to choose the television programs that they deem acceptable for themselves and their families. Consumers speak most loudly when they vote with their remote control and change the channel or turn off the TV if a program does not fit their personal criteria.

Obviously, this was not well received by Donohue and his cohorts — they described the response as “telling Christians to shove it.”  He also said in an interview that “… just from what we can gather, thousands of people have been pounding Steve Albani at Comedy Central, and clearly Kelloggs,” and “We have evidence that people have really been pounding Kellogg’s”… presumably without a hint of irony.

May 22, 2012
Beating the Dead Horse of Sexism in Secularism
Next Post

May 22, 2012 Catholic Organizations Sue Government Over Healthcare
Browse Our Archives
What Are Your Thoughts?leave a comment