Earlier this month, the country was all abuzz with news that President Obama stands in support of gay marriage rights.  Of course, amid new Internet trends and celebrations, there was a predictable right-wing media backlash.

One of the most spectacularly homophobic was the response of Mississippi State Representative Andy Gibson (Republican… of course):

Rep. Gipson came out with an impressively transparent reaction to Obama’s pro-gay marriage stance.  He didn’t initially masquerade behind the whole “it will confuse and destroy children” argument or even “Next stop: Man On Chipmunk!”  He went straight to the source:

Been a lot of press on Obama’s opinion on “homosexual marriage.” The only opinion that counts is God’s: see Romans 1:26-28 and Leviticus 20:13. Anyway you slice it, it is sin. Not to mention horrific social policy.

I don’t think I need to clarify which passages he is referring to, but for those of you new to the party, here is Romans 1:26-28 (KJV):

26 For this cause God gave them up unto vile affections: for even their women did change the natural use into that which is against nature:

27 And likewise also the men, leaving the natural use of the woman, burned in their lust one toward another; men with men working that which is unseemly, and receiving in themselves that recompence of their error which was meet.

28 And even as they did not like to retain God in their knowledge, God gave them over to a reprobate mind, to do those things which are not convenient

13 If a man also lie with mankind, as he lieth with a woman, both of them have committed an abomination: they shall surely be put to death; their blood shall be upon them.

Now, do I actually think that ole Andy is saying that we should put gay people to death?  I doubt it.  But this is a case of a representative putting his religious bigotry over the civil rights of his constituents.  The only opinion that counts is God’s?  I think some of the voters would beg to differ.

But don’t worry, everyone.  The Gipsonator clarified that his view isn’t just Biblically based!  It’s based in “facts”! 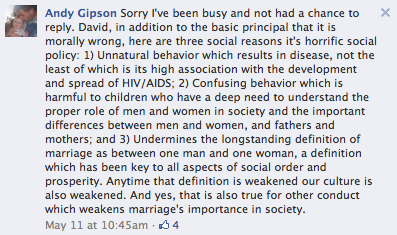 Sorry I’ve been busy and not had a chance to reply. David, in addition to the basic principal that it is morally wrong, here are three social reasons it’s horrific social policy: 1) Unnatural behavior which results in disease, not the least of which is its high association with the development and spread of HIV/AIDS; 2) Confusing behavior which is harmful to children who have a deep need to understand the proper role of men and women in society and the important differences between men and women, and fathers and mothers; and 3) Undermines the longstanding definition of marriage as between one man and one woman, a definition which has been key to all aspects of social order and prosperity. Anytime that definition is weakened our culture is also weakened. And yes, that is also true for other conduct which weakens marriage’s importance in society.

I don’t think I need to explain how most of that doesn’t really mean anything.

“Anytime that definition is weakend, our culture is also weakened”?

“… children… have a deep need to understand the proper role of men and women in society”?

Mr. Gipson needs to realize he represents all of his constituents. He should not cherry-pick which constituents he wants to work for. He should also realize his positions are neither popular nor Republican. LGBT individuals, couples, and families help pay Gipson’s salary. It’s important that he remember that.

If you live in Rankin, Smith, or Simpson country, we urge you to contact Representative Gipson and let him know he represents you. If you choose to contact Gipson, please be respectful. His contact information is below.

May 22, 2012
Pastor's Testimony Excluded from Rape Case
Next Post