You Are All Apes To Me

Fact: Humans and apes share a common ancestor. In that sense, we are apes.

Reaction from Creationist Ken Ham: HOW DARE YOU CALL ME AN APE?!

Ham sees the whole idea as an insult and the fact that the San Diego Zoo was selling books about evolution just set him off: 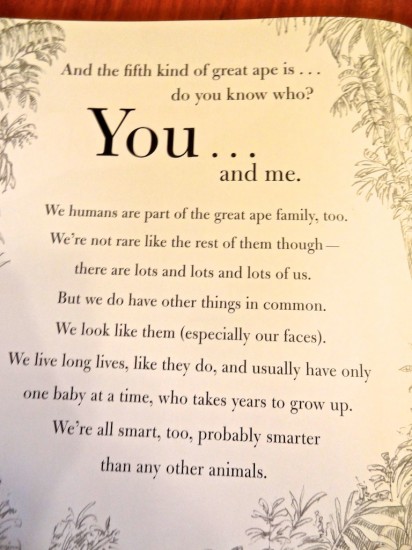 How would you like to have someone tell your children that they “are an ape” — that they are just an animal?

And then he goes on to question why humans are held to different standards than zoo animals:

There were hundreds and hundreds of elementary age school kids at the San Diego Zoo the day we visited. I wonder what the parents of these kids would think if the teachers started calling the kids “apes.” Something like: “Ok you apes, do what I tell you to do.”

I wonder what would happen if kids took off their clothes and said, “We are only apes, and apes don’t have clothes, so why should we have clothes?”

… as we were on the bus tour, the zoo tour guide kept telling the children to be quiet for the animals’ sake! Wait a minute! Didn’t she read this book that the zoo — the facility that employs her — sells? Those kids are just apes — they are animals, too. Why should she tell them to be different to the animals in the pens and cages? I never saw her telling the chimps to be quiet when they were making a racket.

You know that, in his head, he thinks he just disproved all the scientific evidence in the world in support of evolution with those comments…

But that’s the narrative most of the country believes. They not only don’t accept evolution, many find it insulting to even suggest that we’re related to chimps, bonobos, etc. They need to be better educated about it — and religion prevents them from gaining that understanding.

Meanwhile, Ken Ham’s gonna flip out when someone tells him he’s also a mammal.

Tell me again why we’re supposed to respect the beliefs of religious people?