Jesus is Alive in Bradford County, Florida: My Day at a Ten Commandments Protest May 20, 2012 Hemant Mehta

Jesus is Alive in Bradford County, Florida: My Day at a Ten Commandments Protest

This is a guest post by Annie Thomas. Annie is a science teacher and writer from Gainesville, Florida. She last wrote about her night at a Kirk Cameron-hosted “marriage-strengthening” event.

On May 3rd of this year, a monument of the Ten Commandments was unveiled at the Bradford County courthouse in Florida. The $20,000 monument was a gift from Lee Anderson of Lake City. Anderson gave a similar “gift” to Dixie County a few years ago. The Dixie County monument was ruled unconstitutional in July of 2011, but still stands today as the county appeals. The Bradford commissioners knew about the state of the Dixie County monument before they agreed to acquire their own. Lawsuits are nothing new to the city of Starke (home of the Bradford County courthouse). In March of 2007, a federal judge ruled that the crucifix affixed to the city’s water tower (and was even illuminated at night) was unconstitutional and had to come down.

Here is the Ten Commandments monument unveiling ceremony that took place a couple of weeks ago:

On Saturday, May 19th, about eighteen atheists traveled from all over Florida to protest the newly-erected Ten Commandments monument. The Bradford County Courthouse is located in Starke, Florida, a small north central city that straddles U.S. 301 with Camp Blanding to the east and Florida State Prison to the west.

As the protestors proceeded from the parking lot to the front of the courthouse, they passed a circle of thirty bowed heads that were praying for strength and courage. Several people took turns leading the group in prayer, and many prayed for the hearts of the atheists to be turned over to Jesus. 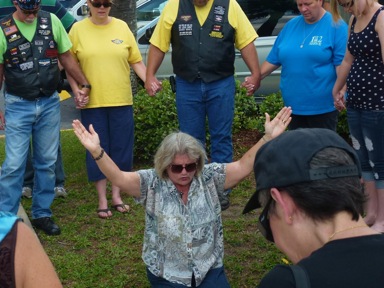 The woman above was saying, “Father God, we’ve remained quiet for too long. We will let your word be heard, Father God.”

Another group of counter-protestors were in a similar circle in the courtyard of the U-shaped building where the Ten Commandments monument stands. By 11:00a, the scheduled start time of the protest, the atheists were lined up along the sidewalk facing U.S. 301, and the counter-protesting group was growing. A headcount at 11:30a revealed that there were 100 counter-protesters and about 18 atheists.

Both groups were in good spirits and relatively peaceful towards each other. However, I overheard Ken Weaver, a Bradford County resident who led the dedication of the monument on May 3rd say to his friend, “They’re not arguing against Church and State; they are arguing about our religion being a myth.” His friend responded, “They’re just a bunch of damn Democrats,” to which both men chuckled.

I briefly interviewed Laura Finley, who was the National Day of Prayer organizer for Bradford County. When asked if there might be a more appropriate place for the monument than the courthouse lawn, she said no, as it represented the word of God, the person who created us. She continued, “We would be kind of like… animals who have no souls” without it. “The protestors here today,” Finley continued, “they don’t have any beliefs in anything.” Finley was quick to point out that she was not at the event to counter-protest, but rather to share her support that the monument had a right to be there.

Early in the event, an unidentified preacher in a gold vest started to encourage the crowd to sing and pray. He utilized an interesting tactic to decipher who was there to protest and who was there to counter-protest. After leading the group in singing “Jesus Loves Me,” he asked participants to shout out if they love Jesus. He then asked them to raise their arms in the air if they love Jesus. He tried to corral the counter-protestors away from the atheists by saying, “Come on people! You’re talking to the wind!” A big circle was formed around the Ten Commandments for more prayer. 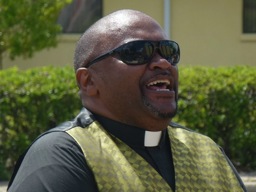 The atheist protestors came from all over the state. Nathaniel Hall, a member of the Tallahassee Atheists (in the red shirt below), was the first to break the invisible barrier and converse with counter-protesters. 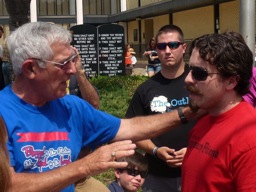 Sean Fraser traveled from Crystal River wearing two hats, one as a protester and another to cover the story for a blog he writes. When asked if he was surprised by the turn-out he said, “Of us? No. Of them? Yes.” This was Fraser’s first protest as an atheist, but he said he’d like to attend more.

Brandi Braschler, president of Freethinkers FSU, was not discouraged by the small turnout or the lack of press coverage. She was part of the group that “unannointed” roads in Polk County earlier this year. “No one was out there, but everyone posted on it” afterwards. As we spoke, a counter-protester (the woman above who was praying to “Father God”) interrupted our conversation. She said, “We don’t want tax payers dollars!” She continued on about “people like you” when Braschler calmly responded, “The First Amendment says a lot of things. But it’s up to the courts, the judges, to interpret what the Constitution means.” This made the other woman walk away, which I observed several times when the counter-protesters had no rebuttal.

I asked David Silverman (who was quick to point out he is not that David Silverman) why he traveled from his home in Jacksonville to protest. “I feel strongly about this and decided to give up a day’s work for this.” He was surprised by the massive monument that was erected and that it was actually a “solid, fixed display.” Silverman (holding the sign in the picture below) added that he had a “long, interesting talk with a Christian and I think I planted a germ.” 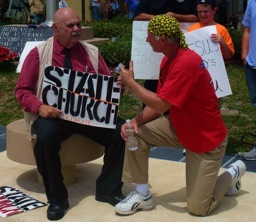 What surprised me most about the event was that this was not about religious rights, but strictly about Christianity. There was no attempt to pass this new monument off as representing a generic god that many could relate to, this was all about Jesus. I asked one counter-protester how he thought a non-Christian in his county might feel about the monument. He couldn’t see why they would care. “I don’t bother them and they don’t bother me” was his response.

The counter-protesters were giddy with delight in their numbers exceeding the protesters. One man yelled out to the crowd, “There’s more preachers in Starke than there are atheists today!” which very well may be true. But what failed to impress them was the great distance the protesters traveled to be in Starke today. Driving for a few hours (as opposed to walking down the street) requires a bit more dedication to a cause. As the sun rose directly overhead, the breeze died down, and stomachs started to ask for lunch, the majority of the counter-protesters drifted off to go about their life. When I asked Brandi Braschler how long she would be there, her response was, “I’m planning to stay here all day.”