A Review of God and the Folly of Faith by Victor Stenger May 17, 2012 Tessa de Leeuw

For centuries science and religion have been at war. Both explain, or try to explain, the world around us in their own way. The more we observed, measured, and probed, the less we needed our gods. The gods of biscuits and hairdos soon made way for bakers and hairdressers and the gods of thunder and harvest made way for meteorologists and, well, meteorologists. Monotheism came and gave us one convenient god who made all these wonderful things for us to observe, measure, and probe. But the more we discovered, the less likely it seemed there was such a god.

This paved the way for the religious and atheist apologists. This is not a new phenomenon. People through the ages have been trying to marry their beliefs to what they see around them. Scientists have explained their findings and stretched reality in order to fit in their predetermined beliefs. Religious leaders conveniently forget certain parts of their Scriptures if they no longer fit in today’s society while hammering on others. Intelligent design, though a bad theory, is a good example of the religious trying to marry scientific observation with religious teachings.

On April 24th, a new book came out about this dichotomy and the problems with religion and religious apologetics in modern society. The book was called God and the Folly of Faith: The Incompatibility of Science and Religion by Victor J. Stenger. It is extensive, substantial, all-inclusive, informative, and beautiful in its own right, but I will get to that shortly. 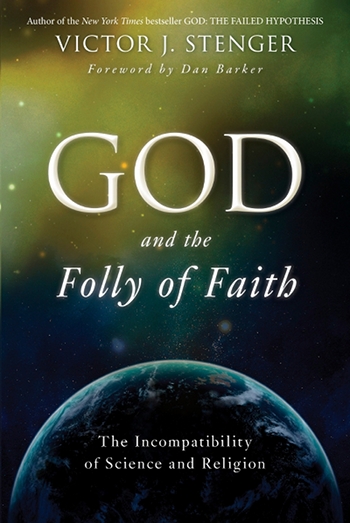 First, I would implore you not to read the book.

Buy it — do buy it — but for the love of all that is, well, known to science, do not read it. And if you insist on reading it, then please, do not read it in one session. Not like you would any other book. God and the Folly of Faith is a textbook and should be used as such.

Stenger is obviously a knowledgeable and well-read individual. He has done a copious amount of reading and research and, as a result, he wants to impart as many facts as possible onto his readers. I don’t know Dr. Stenger personally, but I imagine he is a wise and friendly man, popular among his friends and feared by his enemies. And though he is probably all these things and more, he is not a good writer. Wherever he could use only five words, only two sentences, only one paragraph, he used a multiple of that. The man is as longwinded as you would expect a professor of both physics and philosophy to be.

According to Stenger, the marriage between religion and science is a ridiculous concept. He goes into a lot of background and history of the issue. He picks apart earlier arguments made by religious and atheist apologists (who also believe science and religion are compatible) and explains how a world without religion would have looked very different. He shows how some religions have stymied the development of science and how others have helped it flourish. The content is interesting; the execution, not so much.

Apart form being dry and monotonous, the tone of the book is also very angry. Stenger is obviously fed up with the lovey-dovey, hippie-esque, “Why can’t we all just get along?”-mentality and he lets his readers know this. The work is one angry diatribe against everything from mass prayer to saying “Bless you.” If it has even the lightest whiff of the occult, Stenger is there to tell us how awful it is. Many pages read like the author is screaming at you from the top of his lungs. The book preaches to the choir and the negative tone alienates the very theists who would benefit from it the most. Sure, he outlines how Islam helped science develop, rather than suppressing it, but that is just a tiny speck of positive light in an otherwise long, dark and bitter rage on everyone who has ever tried to marry religion and science at any time in our known history.

Stenger — like many New Atheists — holds that religion is basically fallacious and at the root of all our problems. I consider myself a New Atheist and as such it was hard not to agree with Stenger’s premise. This does not make the book any more readable, though. Reading the book I felt like a jungle explorer, hacking my way through quotes and dates and other peoples’ arguments to get to small nuggets of wisdom, that, like the lost city of gold, were promised before I set off on my journey. Sadly, much like the lost city of gold, the wisdom and answers were too well hidden, which leads me to believe they might not have been there in the first place. Because the book reads as one continuous piece, it is all but impossible to even find a good, succinct, quote to use for this review, let alone pluck out an eloquent and intelligent argument against the marriage of science and religion. Other than “It doesn’t work,” I can’t come up with anything.

At several points in time it has been postulated that man is made up of two parts: the body and the mind, both interacting with the world, and the soul, where the personality and the concept of “I” reside. According to proponents of this theory, this split between body and soul makes it possible for religion and science to coexist in one person. Simply put, they propose that science is far more adept at focusing on the outside world, where religious explanations are known to be primitive and untrue, and religion can provide better answers where the soul is concerned, because science can’t observe and test in this area.

This is how many religious scientists defend their beliefs, and how scientifically-curious religious people defend theirs. Stenger refutes this in his own long-winded fashion by showing how science is now able to test and observe that which the apologists would call the soul. With this he wipes this split-personality-premise off the table. There are many more of these beautiful ways in which Stenger wields reason and historical evidence to refute the idea that science and religion can coexist, but the mind-numbingly boring writing takes the shine off of most of these arguments.

If you find yourself in a discussion with a religious scientist, or a scientific theist, this book does not help. At least not as a work of reference from which you can easily look up the answer to any argument (read: fallacy) they challenge you with so you can then smash them to the ground with your perfectly logical and well-structured retort. The only way to use this book in such a discussion, would be if you had studied it long before and were able to wield it as a whole.

In conclusion, I have to say I’m on the fence.

Buy the book, but only if you’ll admit that you put it on your bookshelf because it looks pretty and it makes you look smarter.

Buy the book to read it, but read it one chapter a month and take breaks reading happier, easier fare such as A Brief History of Time by Stephen Hawking.

Or don’t buy the book, be happy in the knowledge that it exists, and the next time somebody tries to convince you this marriage between science and religion could be the answer, point your opponent to it. Maybe that is the best option. We should inflict this book on people we don’t agree with. Not only do we get the satisfaction that we have annoyed them with a wholly unreadable book, but maybe, just maybe, they will be persuaded a bit. Maybe it will plant the seed of doubt. And maybe we can then finally sign those divorce papers.

May 16, 2012
Don't Use the Bible to Justify Your Homophobia When There Are Other Reasons
Next Post