Is there a way to get religious believers to trust atheists? We already know we’re the least trusted minority group out there — can we change that?

Researchers Will M. Gervais and Ara Norenzayan of the University of British Columbia, Vancouver are back and they believe there is a way.

In the May, 2012 edition of the journal Psychological Science, they lay out one solution:

Remind people of secular authority. In other words, remind them that we place authority in cops and courts (and, implicitly, not god).

For believers, thinking of God, like thinking of social surveillance by peers, increases both public self-awareness… and socially desirable responding… By making people feel that their behavior is being monitored, belief in watchful gods may increase cooperative behavior… As a result, religious people may interpret other people’s belief in watchful gods as a cue that they can be trusted.

Secular and sacred authority may also serve interchangeable functions in encouraging prosocial behavior, albeit with different implications for distrust of atheists. The view that atheists are untrustworthy because they do not believe that their behavior is monitored by a divine power may erode to the extent that people are aware of effective monitoring by other “higher” (but not supernatural) powers. If so, then reminders of secular authorities that enforce prosocial behavior should reduce believers’ distrust of atheists. Furthermore, this effect should be specific to distrust of atheists, rather than extending to prejudice in general.

Here’s what they did.

In one experiment, participants watched a movie about either a tourist visiting Canada (control group) or the Vancouver police chief giving the year-end report (experimental group). Afterwards, the groups were asked questions that included items dealing with the trustworthiness of atheists (e.g. “In times of crisis, I am more inclined to trust people who are religious”).

What happened? The amount of atheist distrust was lower with the group who watched the video of the cop: 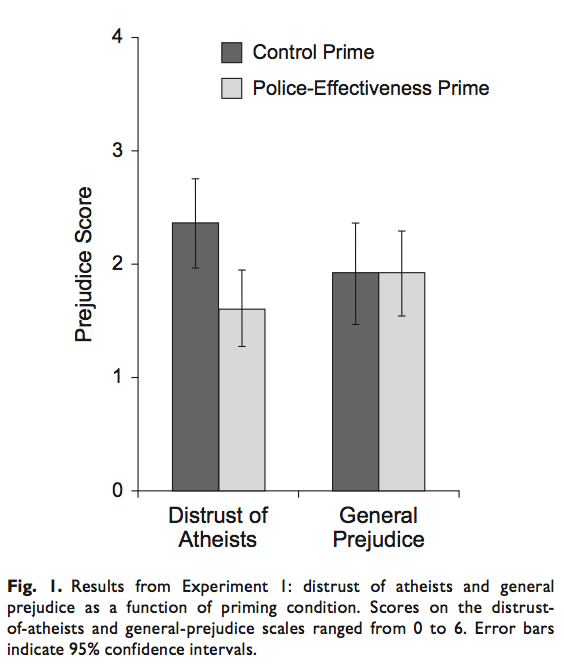 Maybe that was a fluke, though…

So they compared distrust toward atheists with disgust toward homosexuals (both are minorities, with concealable identities, who are seen as “threats” to religious groups). Basically, they wanted to know whether examples of secular authority reduced distrust among atheists or distrust among generally-unliked minority groups.

They gave a (different) group words to unscramble and rearrange. Some of the group members were given words like “civic,” “contract,” “jury,” “court,” and “police.” The others were given random, non-authority-related words.

Then they asked them questions measuring their anti-gay and anti-atheist prejudice.

This time, the anti-gay prejudice didn’t change… but anti-atheist distrust was reduced: 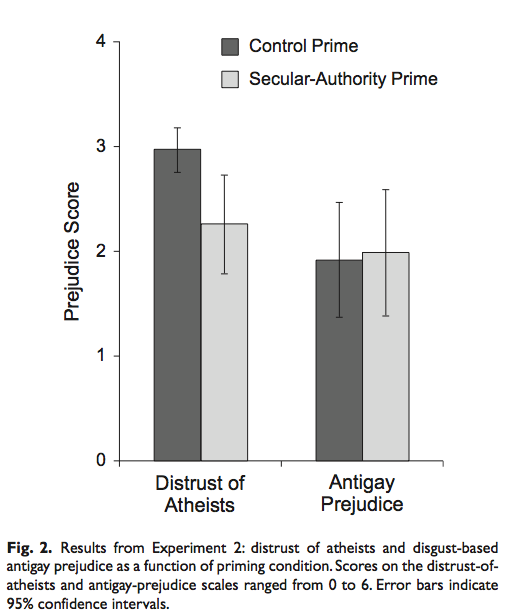 But even if people harbor anti-gay prejudice, do they distrust them like they do atheists?

Time for one last experiment. A different group was chosen and broken up into subgroups. Each was assigned the same unscrambling task as before. Then, in a seemingly unrelated task, they were asked questions specifically about distrust of atheists and gays.

Once again, the effect on distrust of gay people was negligible. But the level of distrust of atheists went down: 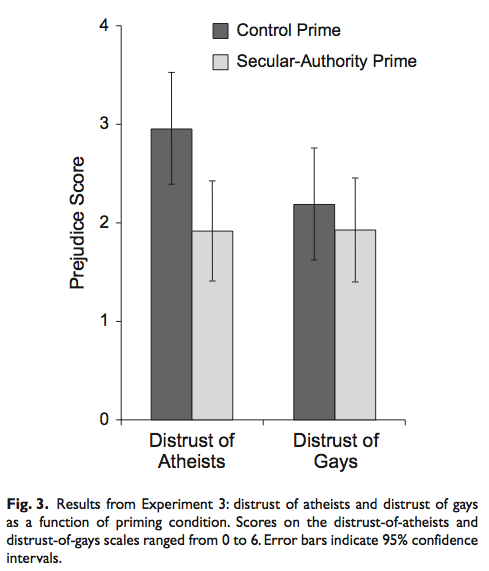 So what’s up with that?! Gervais and Norenzayan conclude:

Our three experiments demonstrated that subtle reminders of effective secular authority — secular institutions that help secure cooperation among individuals — reduce religious believers’ distrust of atheists. In addition, we tested and found no support for three theoretically plausible alternative explanations for these findings.

Although religious prosociality may have served as an initial mechanism for bootstrapping large-scale cooperation in some cultures, cooperative groups may create a variety of secular institutions that also promote cooperation. As reliance on these secular institutions waxes in many societies, the influence of religion wanes… As a result, places that tend to have more effective governments also have much less religious belief (e.g., Scandinavia…).

What can we do with this information? I don’t know about you, but this is my new business card:

(Thanks to Lauren for the link!)

May 15, 2012
Discounted Memberships for Secular Student Alliance Alumni
Next Post