More Stories from Atheists in Christian Workplaces May 10, 2012 Hemant Mehta

Over the weekend, this was posted at Postsecret: 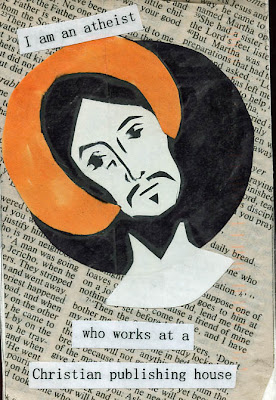 I’ve heard from a few of you who are in that type of predicament right now. Turns out the secret’s owner isn’t alone.

Five years ago, after growing up in and being educated in church institutions, I lost my faith. Trouble is, I’m married to a pastor and have since entered church employment myself — I lost my non-church job early in the economic crisis and a number of months later was finally offered a job at a church institution. I keep the job because it provides education benefits to my children and will for some time to come.

The only scenarios in which I can imagine coming out are these: a) my husband also loses his faith, and b) divorce. Every other one involves both of us losing our jobs and those education benefits.

In the meantime, I view church and my workplace as an anthropological expedition while maintaining authentic relationships. I try not to do both things at the same time.

Another noticed a secret of his own at the church he works at:

I was an agnostic when I started working at church, grew to an atheist while working there. I think it’s probably more common than you think.

I have a few stories, like how the head preacher puts an envelope into the offering bucket faithfully every service and it’s always empty. He gives once a year, on 12/31, probably after consulting his tax accountant.

Also, staff meetings suck. As with any place, people often disagree on how things should be done. But inevitably some idiot is going to chime in and say “Well I believe God wants us to….” or even better, “I prayed about this last night and
God told me we should…”

HOW THE HELL DO YOU REASON WITH THAT?

And that is why so many bad decisions are made in the church business.

One reader worked in a religious non-profit group for a long time:

You asked about atheists working in religious organizations. I did for 15 years and it was interesting. At the start, about 20% of the money came from the US Government and 80% came from private donations. Being an older Christian organization, the main donors were also older. Between this core group starting to die off and the general economic downturn, the funding started to shift until it was about 50/50. Total budget was about $80 million, at least as of two years ago when I left.

Now, the fun thing about federal grants is that they explicitly cite that the money has to go to the designated project (no surprise), but in our case, it also said we had to not be using it for religious purposes. I don’t know if this is standard federal contract language (I hope it is) but it was in ours.

As the shift in funding sources progressed, I got more and more requests to find ways to move some of my funding ($10 million of the government money) over to the more religious side. I will admit I took some delight in draping myself in the constitution and contract and regretfully telling them I couldn’t. I am not American, which made it a bit more fun. In any case, I had that legal support, which helped a lot. My direct boss, also an atheist, was in charge of the full $40 million and worked in head office. He faced much more constant pressure on the topic of funding and was the one who taught me to reach for the contract every time it came up.

Our half of the office worked with refugees and he came to the US as a refugee. He was ideologically motivated to work with refugees, so he was willing to deal with the churchy part of things. In my case, we were in Kenya and did direct service, so the churchy part never came through, at least until I was promoted to more senior levels. By then, I ran our office and could set the tone, so I didn’t have to deal with constant churchy-ness. In both our cases, there were a lot of “fellow travelers” who wanted to help refugees, but for religious reasons. Given how limited aid to refugees is, we could usually find enough common ground to work with the church groups.

Writing this, I realize that it may impact on the recent “Catholic hospitals getting government money and refusing to give staff birth control.” It might be rather interesting to see the contract, agreement, or cooperative agreement that the government gives those hospitals. I wager there are a number which have language about keeping things secular and where the terms of the contract are being breached. I wonder if they can be accessed with FOIA or some other public transparency method.

There have to be more of these… keep sending them!

May 10, 2012
Thoughts About Barack Obama, Sean Faircloth, and Edwina Rogers
Next Post