He’s the University of Nebraska assistant football coach who believes very strongly in the literal truth of the Bible. So strongly, in fact, that he spoke at a City Council meeting in Omaha back in March, opposing a law that would have banned discrimination on the basis of sexual orientation or gender identity. 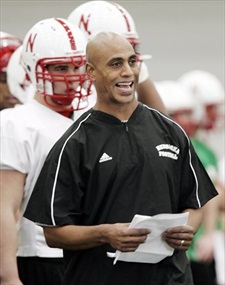 Brown has a long history of using his platform as a coach in a prestigious football program to trumpet his bigotry, leading a number of journalists and a member of the Lincoln Board of Education to call for Brown’s firing. While he certainly has a right to his opinions, however vile, the intermingling of Cornhusker football with Brown’s Bible-based message is illegal and violates the University’s own anti-discrimination policy.

It seems that all the attention Brown has gotten on the subject is finally starting to drive that point home. On Saturday, Brown told the Lincoln Journal-Star that he would not testify regarding a proposed Lincoln ordinance similar to the one in Omaha (which ultimately passed).

Unfortunately, it’s a clear-cut case of “right outcome, wrong reasons.” Brown stated that he’s choosing not to testify so as not to draw attention away from the discussion over the ordinance:

“A number of fellow Christians who have been working on legislation and working on the nuts and bolts of this issue told me, ‘Look, there’s going to be so much media attention over you, it’s going to take away from the issue,'” Brown told the Journal Star.

Although he acknowledges that he was wrong to give the Memorial Stadium address as his own when testifying in Omaha, Brown also refuses to admit the need for separation between his personal views and his conduct in the workplace. In a letter to Journal-Star readers, Brown says:

Not all of my players have agreed with the Bible’s views. One example, of many, would be those choosing heterosexual sex outside of marriage. Though the Bible teaches this as sin, I haven’t penalized them with playing time or discrimination of any sort. Because I love them, I’ve invested in them even outside of football and gently asked them to consider God’s view on it.

If I coached a gay player, because the Bible says homosexuality is a sin, I would do the same. If he didn’t agree, I wouldn’t penalize him with playing time or any form of discrimination.

What Brown is failing (or refusing) to recognize is that such requests, however gentle, are still discriminatory. I applaud (sarcastically) his insistence that he wouldn’t penalize a player for disagreeing with him, but that’s not the issue at hand. The issue is that Brown is creating a hostile, unwelcoming environment for players who don’t acknowledge the moral authority of his Bible, and he’s doing it in his capacity as coach.

Unless Ron Brown can drive a clear wedge between his private opinions and his relationship with his players, the University of Nebraska should absolutely fire him. Even if Brown demonstrates a renewed commitment to leaving the God-talk at the locker room door, I’d argue that he has too many strikes against him. Brief episode of good judgment aside, Brown’s fundamental attitudes aren’t going to change anytime soon, and it’s time for the University of Nebraska to step up and do right by its LGBT students.

May 8, 2012
Pastor Sean Harris Tries to Explain His Antigay Comments to an Atheist
Next Post