After ‘It’s OK To Be Gay’ Article Appears in High School Yearbook, One Christian Administrator Wants the Faculty Sponsor Fired or Arrested May 4, 2012 Hemant Mehta

After ‘It’s OK To Be Gay’ Article Appears in High School Yearbook, One Christian Administrator Wants the Faculty Sponsor Fired or Arrested

Remember Krystal Myers? She’s the teenager who wrote an article for her school newspaper entitled “No Rights: The Life of an Atheist,” about how her school actively promoted religion and discriminated against atheists… only to have her administration tell her the article would not be allowed to run because… well… you know.

Her school, Lenior City High School, is back in the news. Once again, it’s not for a good reason…

When the yearbooks were distributed last Friday, they included an article called “It’s OK to be Gay” featuring gay student Zac Mitchell talking about how his family has known all his life that he was gay and how, even though he has been bullied, his friends have been pretty accepting of him: 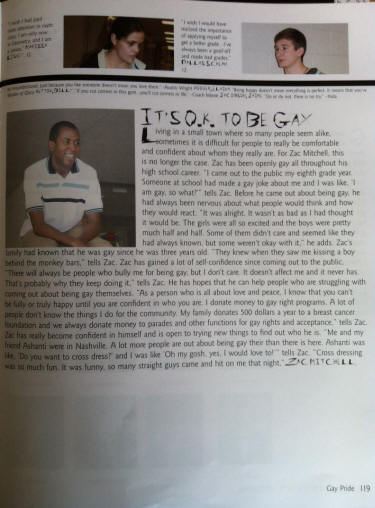 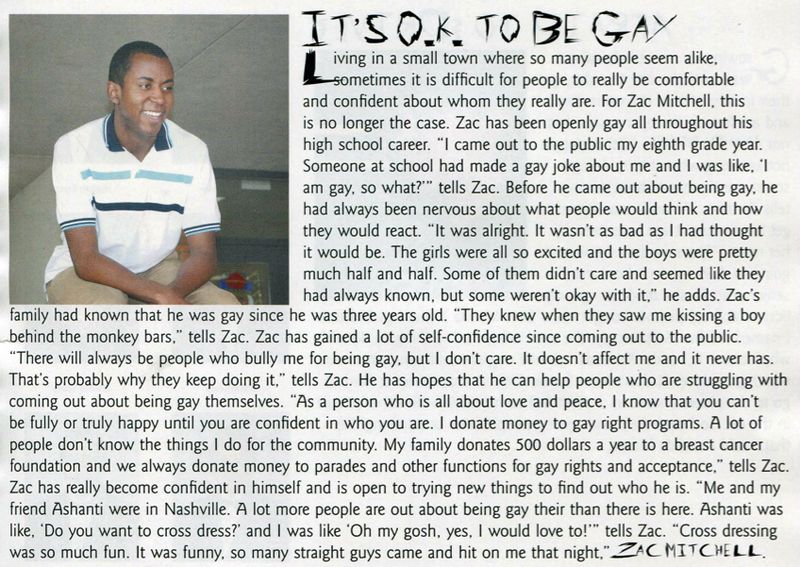 So, naturally, everyone in the community is horrified:

According to students, petitions were being circulated urging others to tear the page from their yearbook as a sign of protest during graduation or to deny Mitchell the right to attend the ceremony.

The 17-year-old student who wrote the article said she was afraid to have her name published.

“There have been threats made starting with, ‘If I found out who wrote the story,’ ” she said.

Not only that, Loudon County school board member Van Shaver is calling for criminal investigations into journalism teacher James Yoakley, the faculty sponsor of the yearbook:

If in fact it was Mr. Yoakley or any other teacher who allowed this article to be published in the year book, they should be dismissed from the school immediately. If it is found or known that Mr. Yoakley or any other teacher at any time has had any conversations or discussions with this student or any other student about their sexual orientation, sexual activities or anything about their private lives prior to those students being of legal age, those teachers should be charged with child sex abuse by an authority figure and arrested.

… I know many other parents and members of our community expect a full and open investigation by school administrators and law enforcement into this issue and to hold accountable any and all those who had a hand in this despicable act.

First of all, Shaver is a member of a school board! THAT IS HORRIFYING! (Just to be clear, the Loudon County school board Shaver sits on doesn’t control neighboring Lenoir City High School. So he doesn’t actually have any authority in this case. Still, the fact that an elected school board member could be this full of animus against gay-friendly teachers should set off alarms for everybody in the community.)

The forced-to-remain-anonymous student said as much:

“My journalism professor never once pressured us to have certain beliefs,” she said.

Courtney Price, the editor of the yearbook, sent a message to Shaver — and he was so appalled by it, he posted it on his website:

My name is Courtney Price. I am editor of the yearbook. Sir, excuse my rudeness, but you do not have your facts straight. I decided to publish Zach’s story. I did not do this to cause any kind of uproar, or religion target. I am an 18 year old Southern Baptist student who is in a four year relationship with a man. I am in no way trying to plead a case for homosexuals, and taking from your stupidity, I can tell you did not read the yearbook. There are multiple stories about kids who have been bullied because of their lives (disabled kids, adopted kids, kids with tattoos, etc.) along with stories about hanging out at church. I would enjoy if you would stop your slander. Thank you.

Holy crap, I may have to take back any negative thoughts I’ve ever had about Southern Baptists… way to go, Courtney!

Meanwhile, the principal at Lenoir City High School, Steve Millsaps, is just distancing himself from the issue as much as possible:

Millsaps said he did not personally approve the content for the yearbook. Faculty advisers are responsible for reviewing the content, he said.

Millsaps said he also thinks it’s possible that the intersection of the two issues may have added to the controversy.

“It’s kind of like the perfect storm,” he said.

Way to stand up for your students and staff, principal. A better administrator would have defended their right to free speech, even if some people in the community didn’t like it. A better administrator would have said there’s nothing wrong with the article; it highlights the life of a student and it was deemed worthy enough to include in the yearbook by the students in charge, not to mention there’s nothing inappropriate in the piece.

Here’s the upside to this story: Somehow, all these intelligent, upstanding students are coming out of a school led by some intolerant, ignorant adults.

Credit the worthy teachers at that school for inspiring these students in spite of their administrators’ worst intentions. After reading about this incident and Krystal’s story, I’m especially grateful to know my own administrators would defend me if anyone tried to go after me for supporting equal rights and open minds.

I’m sure Krystal Myers has enough material now to write a follow-up article to her last one… can’t wait to read it.

(Thanks to Cheryl for the link)