The Memorial Cross in Woonsocket Needs to Get Off Government Property May 3, 2012 Hemant Mehta

The Memorial Cross in Woonsocket Needs to Get Off Government Property

There’s a memorial in Woonsocket, Rhode Island dedicated to local veterans killed in World Wars I and II. It was built in 1921. It sits on government property. And it looks like this: 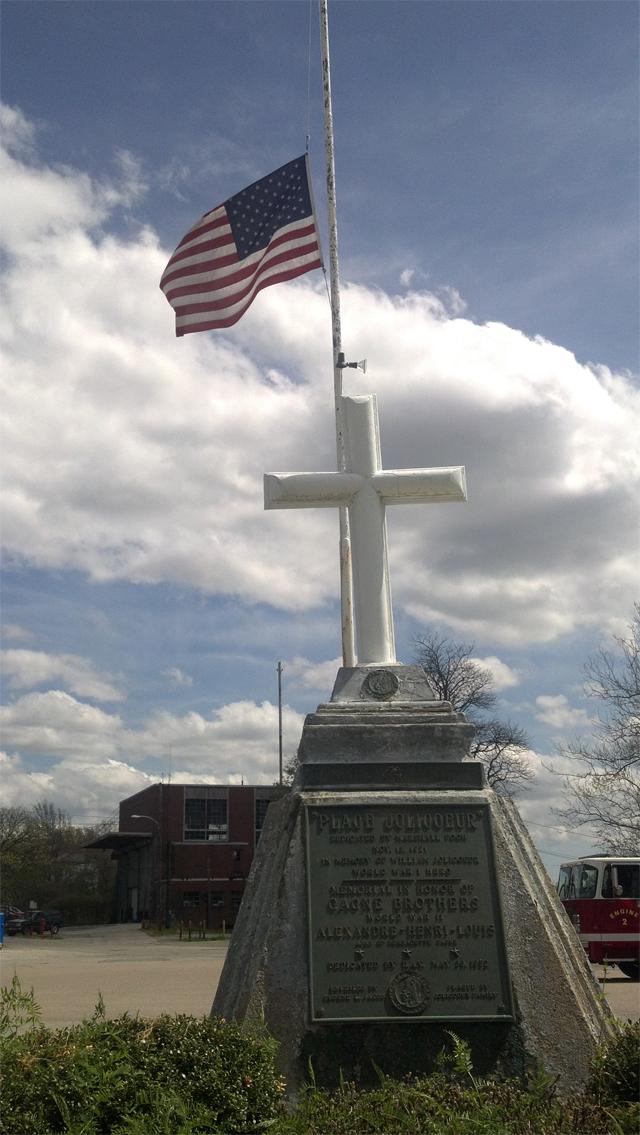 My first thought when I heard about the story was that it was similar to the 9/11 Cross and Seven in Heaven Way. Basically, it was a delicate issue. For a lot of people in the community, this was less a Christian symbol than a symbol of those who lost their lives in war. Any attempt to remove it would likely be seen as an insult to the veterans instead of a patriotic support of church/state separation. It wasn’t that atheists shouldn’t go after this Constitutional violation — we should — but we had to be very careful with how we approached them.

Now that I’ve seen how the town’s reacted, though, I’m less interested in being sensitive to their mindsets…

First, the Freedom From Religion Foundation sent a letter (PDF) to Mayor Leo Fontaine urging him to remove the cross, listing all sorts of reasons this was impermissible:

Senior Staff Attorney Rebecca Market noted in FFRF’s letter that it’s illegal for the city to display “patently religious symbols and messages on city property.” The website impermissibly demonstrates a preference for religion over nonreligion. The Latin cross at the fire station demonstrates Woonsocket’s preference for Christianity over other religions and nonreligion. Such government endorsements of religion runs afoul of the Establishment Clause of the United States Constitution.

Of course, the thought of moving the cross to a private location has everyone flipping out:

An estimated 1,500 people turned out Wednesday to defend a Rhode Island war memorial topped with a cross that has drawn a complaint from an atheist group.

The event was organized by the former head of the Rhode Island National Guard. Maj. Gen. Reginald Centracchio said the monument isn’t forcing religion on anyone.

“This is a war memorial. It’s part of our history. It’s a historical artifact. The line in the sand is right here. It stops here. My fear is if we don’t succeed here, the next step will be Exeter cemetery and after that, Arlington,” Centracchio said.

Of course, no one’s going after the religious emblems at Arlington — those are optional and the choice of the next-of-kin of the deceased. There are also a variety of symbols (including an atheist one) available. That’s a far cry from the Woonsocket Cross, which suggests that all the local war veterans were Christians. Even if they were, that’s still a symbol that ought to be placed in a church, not government property.

FFRF has the upper hand here, since they’re right and the city can’t afford a legal fight:

The Woonsocket Call reported April 23 that the city is exploring its options. “I have no intention of removing the cross under any circumstances,” the newspaper quoted Fontaine saying.

But, Fontaine said, it may be necessary to move the monument to private property. City Council President John Ward said the city, which is in dire financial straits, can’t afford a costly legal battle. “I would not vote to pay to defend it,” Ward said.

The city has set up a war memorial fund just in case they decide to defend themselves in the legal battle they’re going to lose, and Liberty Counsel (a Christian Right group) has offered to defend them for free.

Like most defenders of illegal religious artifacts, Fontaine’s defense is basically “It’s always been here, so that automatically makes it right.” Annie Laurie doesn’t let him get away with it and good for her on that.

(Incidentally, there’s one atheist group that claims to oppose FFRF’s efforts to remove the cross, but I’ve heard from my own sources that many members of that group don’t feel the same way.)

Ultimately, FFRF is right and the Mayor of Woonsocket needs to move the cross to private property. It’s an easy move and it saves the town the trouble of losing money in a lawsuit. Too bad the Christian citizens protesting against the Constitution can’t see that doing the right thing is in their best interest.

May 3, 2012
The Atheist Who Temporarily Became a Christian Is An Atheist Again... and He's Filing Another Lawsuit
Next Post

May 3, 2012 The Atheist Lobby's New Executive Director is a Female Republican Strategist Who Used to Work for George W. Bush
Browse Our Archives
What Are Your Thoughts?leave a comment