Falmouth Residents Up in Arms because City Council Member Skipped the Pledge of Allegiance May 3, 2012 Hemant Mehta

What prompted hundreds of people to rally outside Town Hall in Falmouth, Massachusetts earlier this week?

Was it corruption by the mayor? No.

Were they protesting against the 1%? No.

They were pissed off because Melissa Freitag, the Vice Chairman of the Board of Selectmen (a.k.a. City Council), was stepping in for the Chairman (who was out for medical reasons) and — wait for it — she decided not to say the Pledge of Allegiance: 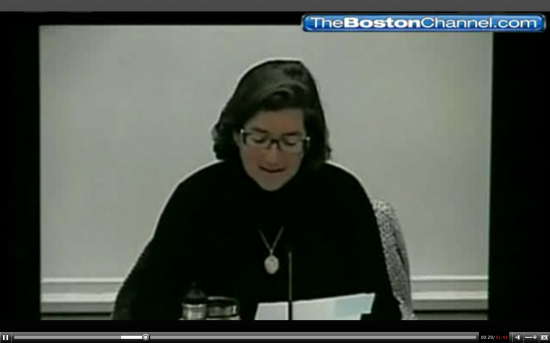 As acting chairman, Freitag started last Monday night’s meeting with a poem, then went on to say she’d “rather not” say the pledge. She then quickly moved on to the night’s business.

She skipped the meaningless ritual and got right down to work… and people are upset?!

That’s what you’re supposed to want your city officials to do!

Many who gathered on the Falmouth green called Freitag’s actions “unpatriotic.”

Others argued that as an elected official who took an oath, she should have left her personal opinion at home.

“She’s under oath and the Board of Selectmen made it a policy that they say the Pledge of Allegiance. She ignored policy and ignored her oath,” said Ted Theis, a Vietnam veteran.

Dick Bolduc, a Korean War veteran, said “substituting the pledge with a poem? Give me a break! People spilled good blood for that flag.”

Right. They’re all mad because she “ignored her oath.” As if people come to Selectmen meetings to make sure everyone is following it… As if getting right down to business is a violation of some important moral code… As if they weren’t really upset because God was left out of the meeting.

Seriously, how much do you want to bet that the people protesting had no idea what was on the meeting agenda that night? Their only concern is whether god was included in the mix.

Monday night, Freitag did join the rest of the selectmen on the Town Hall green to recite the pledge. She did not, however, say the words “under God.”

She again omitted those words once back inside Town Hall, when she stood for the pledge at the selectmen’s meeting.

After the meeting, Freitag said she regretted it if she offended anyone last week.

I don’t know what Freitag’s religious beliefs are or whether she’s an atheist. But it doesn’t matter. She did something harmless and the whole city seems up in arms over nothing. If only they were as passionate about the things the Selectmen did during the substantive part of the meeting, maybe the city would be in better shape.

(Thanks to Kim for the link!)

May 3, 2012
The Atheist Lobby's New Executive Director is a Female Republican Strategist Who Used to Work for George W. Bush
Next Post