Last week, the Vatican appointed Archbishop Peter Sartain of Seattle to oversee “reform” of the largest and most influential group of Catholic nuns in the United States, the Leadership Conference of Women Religious (LCWR).

And by reform, they mean silence.

The LCWR — created in 1956 by request of the Vatican itself — is comprised of 1500 Women Religious (sisters), representing 80% of the 56,000 religious sisters in the United States.

In 2009, the Vatican decided to begin an Assessment of the LCWR “as a result of several years of examination of the doctrinal content of statements from the LCWR and of their annual conferences” with the belief that some statements “disagree[d] with or challenge[d] the bishops, who are the church’s authentic teachers of faith and morals.”

Now, three years later, the Vatican has provided their Doctrinal Assessment of the LCWR.

The Holy See acknowledges with gratitude the great contribution of women Religiousto the Church in the United States as seen  particularly in the many schools, hospitals, and institutions of support for the poor which have been founded and staffed by Religious over the years.

Then they tell you what they really think:

… (The Doctrinal Assessment) does not intend to offer judgment on the faith and life of  Women Religious in the member Congregations which belong to that conference,  nevertheless the Assessment reveals serious doctrinal problems which affect many in Consecrated Life.

The Vatican is up in arms because the LCWR women are exploring their faith and *gasp* forming their own opinions of what living through Christ means to them.

These sisters are being accused of:

…some Religious “moving beyond the Church” or even beyond Jesus.  This is a challenge not only to core Catholic beliefs; such a rejection of faith is also a serious source of scandal and is incompatible with religious life.

The LCWR are surprised by what the Vatican had to say and offered this statement on their site: 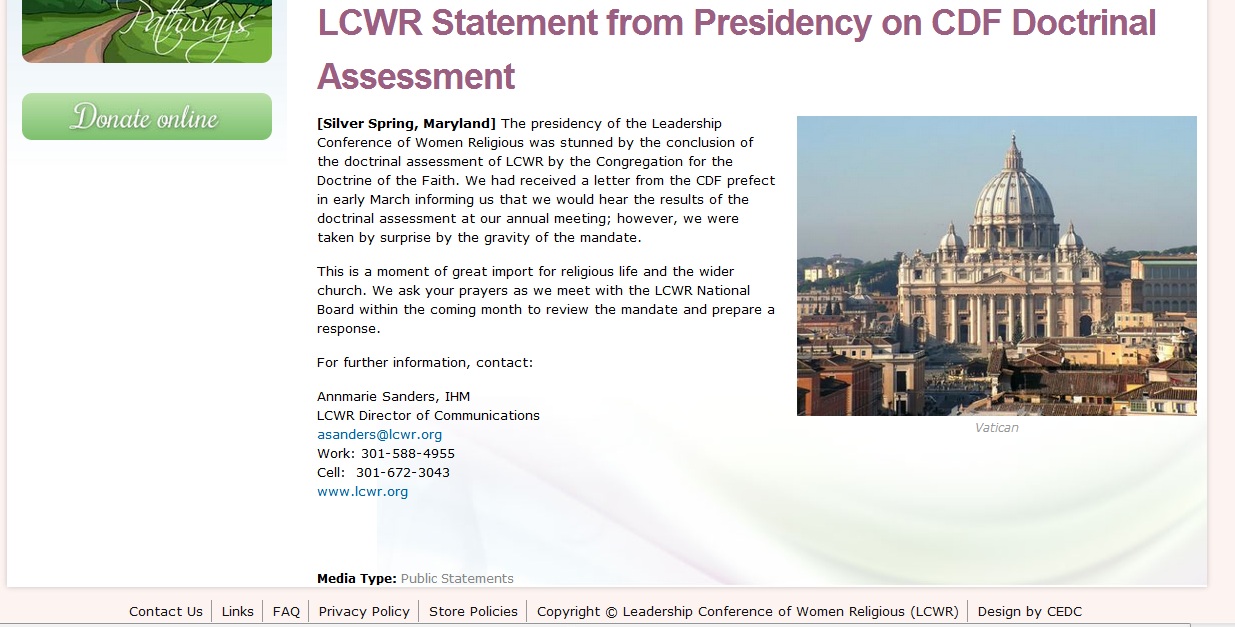 The presidency of the Leadership Conference of Women Religious was stunned by the conclusion of the doctrinal assessment of LCWR by the Congregation for the Doctrine of the Faith. We had received a letter from the CDF prefect in early March informing us that we would hear the results of the doctrinal assessment at our annual meeting; however, we were taken by surprise by the gravity of the mandate.

In an effort to remedy this “grave” situation and “matter of serious concern,” Archbishop Sartain, in taking control of the Conference, is writing new laws, displacing the leadership, and prohibiting “political” activity (like social work, according to Rome).

However, in all of their finger pointing misogyny, the Vatican doesn’t cite specific examples of public statements the LCWR made that are so condemning.

Sister Simone Campbell, executive director of Network, a Catholic social justice lobby founded by sisters and affiliated with LCWR, theorized as to what did it: “I would imagine that it was our health care letter that made them mad… We haven’t violated any teaching, we have just been raising questions and interpreting politics.”  Her group was also cited in the Vatican document, along with the LCWR, for focusing its work too much on poverty and economic injustice, while keeping “silent” on abortion and same-sex marriage

According to Christendom College’s Donna Bethell:

In laymen’s terms, “We own you, no independent opinions or views allowed.”

So how does the Vatican respond? With a traditional Catholic PR move.

Despite the scathing accusations they made in their report, CatholicNewAgency.com has an article in which Pope Benedict and Archbishop Sartain are praising the LCWR:

He said he hopes “to work in a positive way,” recognizing “the wonderful contribution of religious women in the United States, and to work in a way that shows our continued love and support for their extraordinary contribution.”

Archbishop Sartain made his remarks in Rome only days after Pope Benedict XVI also publicly praised the contribution religious women make to the U.S. Church and society.

So, you praise them… yet accuse them of near blasphemy?

How the times never change when it comes to this religion. The outright hypocrisy would be surprising were the whole Church not built upon it.

The Vatican is scared. These nuns are thinking on their own, forming opinions of their own, working through their faith in a modern world and actually helping people in their programs.

As atheists, we see the gross injustice, we can look at these situations and understand the real meaning behind their “assessment”: it’s all about power and control. Specifically, it seems, women in religion still aren’t getting it. The men who run religion believe women to be inferior, are angry and fearful of women not doing exactly as their told, and are exerting their “muscles” to keep women from advancing… all under the cloak of “God.”

There is no love loss between me and the Catholic Church. I see the charity that women like the LCWR are doing, but it doesn’t negate the child rape and sexual abuse program, the hypocrisy of living through Christ and helping the poor while being the greatest possessor of material riches in the world, the inferiority of women, the hatred of homosexuals and all around guilt indoctrinated in people for being… themselves.

Every dollar anyone gives to their Catholic parish helps contribute to their Vatican opinion, their atrocities, their vile teachings. How can anyone continue to support an organization that insists on attacking the women in their own ranks simply because they fear them becoming equal?

What we can do is continue to point out the inequality and injustice and continue to do our own good work for humanity. When those who grow weary of the hate, who realize they are pawns in a power struggle, are ready to break free, we will be there as a vast and diverse community that welcomes reason with our Humanism.

April 26, 2012
When It Comes to God's Existence, Who Has the Burden of Proof
Next Post

April 26, 2012 If God Exists, What Would You Say To Him?
Browse Our Archives
What Are Your Thoughts?leave a comment