In Saskatchewan, An Atheist High School Student Tries to Remove Prayer from His Public School’s Graduation

At Three Lakes School, the 17 seniors were given the option of voting for what happened before their graduation banquet:

About a third of the students voted for option 3 — which may not be enough to be the leading option — but now, one of the students is leading the charge to get rid of the first two options altogether. He’s had partial success:

“It was really biased, it had two options for and one against,” [senior Jacob] Nantau said.

The students discussed the matter again Friday and agreed to the compromise of non-religious thanks.

One student will draft the comments for approval by the rest of the class.

Nantau is satisfied for this year, but he wants the Horizon school board to establish a policy for future dinners.

If only we could leave it at that, I’d call it a happy ending.

But take a look at the shit he’s had to go through for voicing his opposition:

Nantau has been insulted, had religious scriptures left in his locker and his vehicle has been vandalized “multiple times” since he began pushing for omission of the prayer, he said.

His car window was smashed and lug nuts were removed from his tire and left on the ground.

“I won’t point fingers but it’s suspicious, given the circumstances,” he said.

That last line may be the most stereotypically Canadian thing I’ve ever heard… politeness despite the fucked up nature of the situation.

Jacob, by the way, claims to be the only atheist in his class, which may be part of the reason he’s been targeted by the vandals: 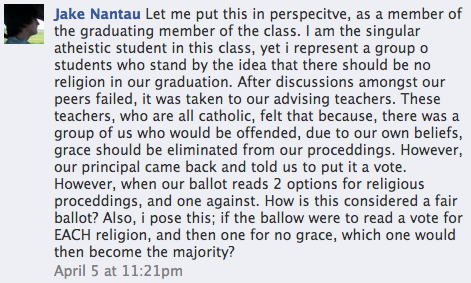 I know Canada doesn’t have separation of church and state like America does, but that doesn’t mean it makes any more sense to say a Christian prayer at a public school graduation ceremony. Focus on education, not the blatant ignorance of it. Give credit to the students who worked hard for this day, not to a god who had nothing to do with it.

Jacob deserves a lot of credit for leading the charge against the prayer and remaining an upright citizen despite the attacks against him, not blaming Christians for what happened without further evidence. And kudos to the (presumably religious) students who voted against saying prayer/grace at the banquet — no matter what your background is, there’s no reason to make those religious traditions part of a public school graduation.

Jacob gave an interview on The Richard Brown Show yesterday and explained the whole situation in much more detail. (You should listen to it for no other reason than to hear Jacob say the word “against.” Aww, Canadians.) He talks about the pushback around the 4:15 mark.

(Thanks to Carlin for the link!)