Join Us April 28 for the ‘Unite Against the War on Women’ Rally April 24, 2012 Shannon Burgdorf

About a month ago, Karen Teegarden and Desiree Jordan, after venting over the phone for the past year about the legislation and attacks on the rights of women decided to take it to the streets. 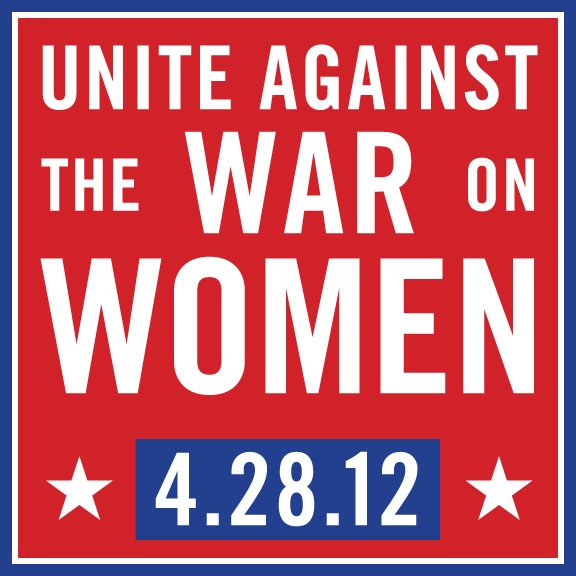 Quickly gaining in popularity via social media, UniteWomen.org has also drawn the support of  NOW, National Coalition of Labor Union Women (CLUW), Religious Coalition for Reproductive Choice, National Equal Rights Amendment Alliance, and many more. Even their Facebook page has exploded, with over 21,000 likes.

In the 21st century, this backward slide in equal rights is infuriating, unbelievable, and abhorrent. There is well documented history of the fight against anti-women legislation. Can it be that a century later we are still fighting to have politicians see beyond gender, race, color, and religion? It is a somber and angering, “Yes.”

In the words of Barbara Hannah Grufferman,

“Enough Is Enough! The days of standing on the sidelines to watch others control our bodies, health, income and rights are over.”

“We experienced deeper and more painful levels of unemployment, a dearth of senior level private and public sector positions (in fact, according to recent reports, more women lost government jobs than men thanks to cuts, cuts and more cuts), legislation and programs that would compromise our health and safety and witnessed ultra conservatives referring to women as sluts and comparing us to farm animals. And that’s just the short list.”

This Saturday, April 28th, 2012, women (and men) all over the country are taking a stand for anyone, regardless of gender, who wishes to support the stand against the attack on women’s rights:

“Unite Against The War on Women is holding marches and rallies all across the Country on April 28th. We will be standing with women and men in every State making sure that our voices are heard!”

You can check here to find where a march will take place in your state. Join the rally!

Enough is enough. Decisions about our bodies ought to be made in our own homes, not in their House.