A couple of months ago, Summit High School in Spring Hill, Tennessee held a “Fictional Character Day” in which students could come to school dressed as their favorite fictional character. Like the Mad Hatter. Or Darth Vader. Or SpongeBob SquarePants. 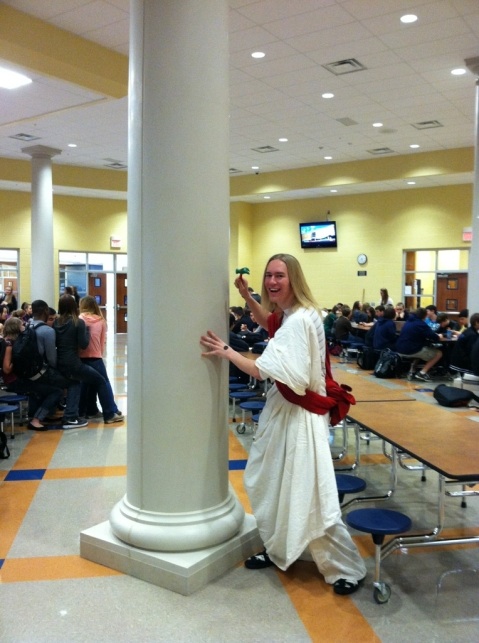 Before class even started that day, Shott was asked by the principal and other staffers to remove his costume. It was inappropriate, they said.

Shott did what he was told, but he explained how everything went down — as well as the other problems with religion in his school — in the essay below, reprinted in the April, 2012 issue of Freethought Today.

For what it’s worth, the Freedom From Religion Foundation issued him a $1,000 scholarship as the first recipient of the Paul J. Gaylor Memorial Student Activist Award 🙂

I’d arrived at school this Monday before 8:15 a.m. and waited in the cafeteria until classes started, eating breakfast with friends and adding finishing touches to my Jesus costume.

The head principal, Dr. Farmer, soon came up and asked me to come to his office. The assistant principal, Ms. Lamb, and Officer Pewit, school resource officer, were waiting outside the cafeteria. Dr. Farmer asked me whom I was portraying. I told him that I was Jesus Christ. He said he had been hoping my answer would have been Zeus (or some other variation of a mythological deity).

Even though I’m typically very openly atheistic and have no problem discussing my views, I was a little distraught that all three school authority figures were addressing me at once. Dr. Farmer claimed I couldn’t have things both ways — I couldn’t complain about teachers talking about Jesus and also dress up as Jesus on Fictional Character Day.

I’d had a long talk with him earlier after my science teacher, in reply to a question about evolution, had publicly said things such as “Evolution is just a theory,” “I don’t believe it at all,” and, “We actually come from Adam and Eve.” It’s fairly clear that she openly advocates not only Intelligent Design, but straight-up biblical creationism.

I immediately asked her, “Can you honestly say that as a science teacher?” She told me that she could. That upset me a lot.

When I mentioned this to him, Dr. Farmer had wondered if we should just teach “both theories” equally, essentially advocating that we “teach the controversy.” I explained why creationism doesn’t belong in a science classroom, that my teacher wouldn’t be able to substantiate her claim with empirical evidence or the scientific method. I compared it to the “Intelligent Falling Theory” of Pastafarianism.

Now, he told me my costume was controversial and likely to disrupt the learning environment. I explained that my quarrel with my science teacher wasn’t one of personal offense, but of professionalism. I told him that by teaching creationism, she was teaching something unconstitutional and flat-out dishonest. As a science teacher and an educator, she was out of line teaching biblical creationism. She was only adding to the already dishearteningly prevalent misconceptions on the theory of evolution, the very basis of our understanding of modern biology.

Both principals said they were worried my costume would spark religious debates in every class and take up large amounts of time. I was sternly warned that if even one teacher reported the slightest disruption, I would have to take off my costume. Then and there, I decided to take it off.

Even though the vast majority of students in my school are religious, many told me how much they liked my costume and how disappointed they were that I had to take it off. Even my teachers thought it was funny. Only a very few of my peers said they thought it was in bad taste, and none did so during instructional time.
I wondered, if a religious debate had been sparked, wouldn’t it be up to the teachers to control the classroom and deal with students who actually disrupted class time? I was merely participating in Fictional Character Day.

When I went home, I posted photos and details of what had happened to the r/atheism section of one of my favorite websites, Reddit.com. My fellow Redditors were, with very few exceptions, overwhelmingly supportive and said my civil liberties had been violated. Many urged me to contact the Freedom from Religion Foundation, so I did.

I soon received a reply from FFRF Staff Attorney Rebecca Markert, who sent a letter to the school district on my behalf, and I greatly appreciate that.

Statistics show that the least trusted and most despised American minority is the atheist community. I, along with most of my atheist friends and family, have experienced this firsthand.

My younger brother and I have both been told that we are only atheists because we are possessed by demons. We’ve been told that when we read the bible as nonbelievers, the devil himself literally changes the words, making it impossible for us to gain an adequate understanding of the word of god. After telling someone that I am an atheist, it’s not uncommon for the initial response to resemble a personal attack such as “You’re a bad person,” or a threat, “You’re going to hell.”

One religionist asked me why I had become an atheist: “Was it family trouble, abuse?” Others assume that atheists are simply rebelling against “god and his rules,” or that we put as much “faith” in science as religious people do in their doctrines.

I’ve even met a very fundamentalist Christian who told me that science is a left-wing conspiracy made up of people rebelling against god.

Last year, a teacher leading the class in prayer openly criticized my brother for refusing to bow his head. One of his peers caught him reading my copy of Richard Dawkins’ The Greatest Show on Earth: The Evidence for Evolution, picked it up and threw it on the ground.

We smile whenever one of our friends tells us we’re on their church’s prayer list. I made one list four times in one day.

People seem less likely to treat you poorly as an atheist once they get to know you and develop a deeper understanding of the reasoning behind your disbelief. I post Facebook status updates of atheist quotes, YouTube videos made by atheists, etc. I share and explain my views and opinions with a sizeable number of the most devout Christians from my school and in my area, including pastors, the Fellowship of Christian Athletes leader at my school and other adults and teens.
I’ve had Christian peers say things like, “I read that debate on your Facebook wall last night, and it really made me think.” In fact, I first really started to get to know my girlfriend after she read some of my anti-theist sentiments on Facebook and struck up a conversation with me.

Being a bible belt atheist has highlights and lowlights. One of the best things any atheist can do, especially in the South, is to come out of the heathen’s closet. When nontheists are open with others, it debunks misconceptions. As Dawkins would say, we act as consciousness raisers, and if enough of us do so, we can shed favorable light on the atheist community and perhaps one day shift the statistics in our favor.

If you had told me two years ago that I would one day be receiving a scholarship and award from a group like FFRF as a result of my secular activism, I wouldn’t have believed you. You see, I was previously quite the quintessential, vehemently fundamentalist Christian — a young Earth creationist, a biblical literalist, a Calvinist, a homophobe — the whole nine yards.

It’s been two years since then, and, though it’s still difficult to wrap my head around the fact that I’ve won an FFRF student activist award, needless to say, I’m honored. 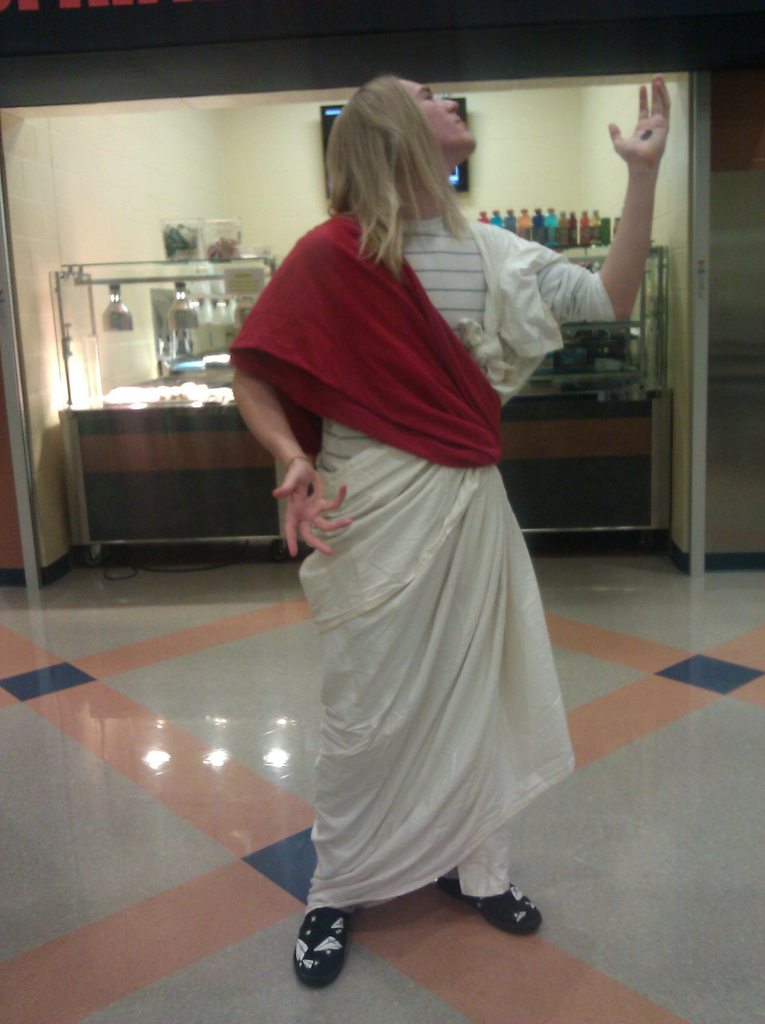