The Religious News Service headline makes it sound like it’s a bad thing…:

When it comes to how their faith is changing, the numbers favor the unaffiliated.

Red has never looked so good: 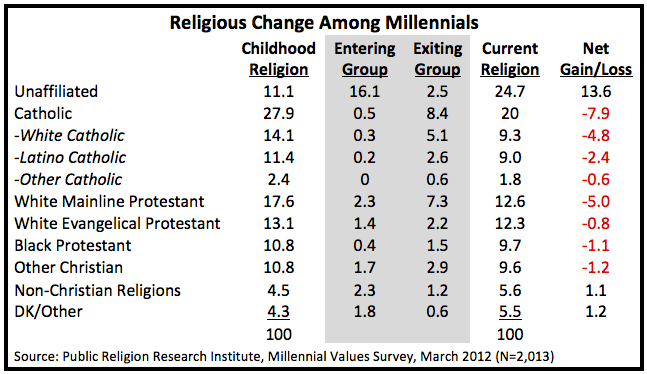 Not only are Catholicism and Christianity losing ground, the study says that “one-quarter (25%) of Millennials identify as religiously unaffiliated.” Not only that, since only 11% of Millennials were raised without faith, more than half of unaffiliated Millennials left their childhood faith.

Some of them will return to their faiths as they age, “but there’s not a lot of evidence that most will come back,” added [PRRI’s research director Daniel] Cox, who said the trend away from organized religion dates back to the early 1990s.

In case you’re wondering how “unaffiliated” is defined, they’re including anyone who responded to the question “What is your present religion, if any?” with Atheist, Agnostic, or Nothing in Particular. (For what it’s worth, other responses included “Just Christian” (no denomination), Something Else, Refused (to answer), and Unitarian.)

So why is this change happening?

I think the answer is contained in large part in this statement (p. 32 in the report):

Christianity represents — to the church’s own detriment — a value system intelligent Millennials want increasingly less association with. Christians are seen as anti-gay, anti-choice, anti-women, anti-sex, anti-intellectual, and pro-bullshit. The younger you are, and the more you’re surrounded by people (like atheists) who make logical, coherent arguments against much of what the church stands for (hopefully with a compassionate heart), the easier it is to realize Christianity isn’t based in truth; it’s based in an archaic and incorrect view of what one group of people (read: men) believes is good for society. Whenever the church figures that out, they’ll have no choice but to adapt (ha!) or watch their numbers dwindle away.

April 20, 2012
Justification for the Nomming of Babies
Next Post