The Toronto Transit Commission has put up a lot of religious/non-religious ads over the past few years. They approved the Canadian Atheist Bus Campaign’s ad, reading “There’s probably no God. Now stop worrying and enjoy your life.”

More recently, they approved an ad from a Christian group in which a child with drug-abusing parents was advised to pray instead of seeking useful help.

Now, they’ve allowed this ad from a Muslim group: 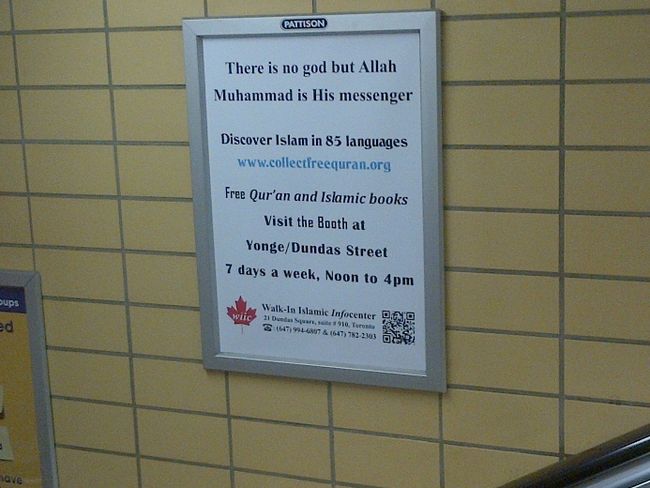 The proper response to that is to say, “Well, they were right up until the fifth word…”

And then you move on.

The wrong response is to listen to what the leader of the group Canadian Hindu Advocacy is saying:

Banerjee claimed the ads are hurtful to Hindus and his group will be handing out anti-Muslim flyers outside the TTC.

“This ad has to be pulled because it is offensive to Hindus,” he said. “The TTC must recognize all religious groups.”

Umm… yes, the TTC must recognize all religious groups. They must allow pro-religious and anti-religious ads to go up (within reason) as long as the groups pay the fees. That’s what their own rules say they must do. Just because you don’t like what an ad says doesn’t mean it has to be pulled.

Canadian Hindu Advocacy, whose website hasn’t been updated since (I presume) 1994, can pay for their own ads if they want. That’s what all the other groups did.

To their credit, the TTC isn’t budging. They’re not taking the Muslims’ ad down.

That’s not stopping the Christian groups from offering more dimwitted advice, though:

David Harrison, president of the Bus Stop Bible Group, also has a problem with the ad.

He said that a small edit to the Muslim ad, such as putting “We believe” at the beginning, would suffice, adding that he supports the fact that every group is entitled to its own opinion.

The TTC has two choices — they can accept or reject all religious ads. They’ve chosen the first option and it looks like they’re sticking to it, even if that means some crazy ads get through the filter. As long as they keep that open door policy going, I doubt they’ll face any opposition from atheists. We’ll pay the money and get our own ads up. But the moment TTC censors one group’s views at the expense of all the others, we’ll be ready to challenge them.

April 18, 2012
Rick Warren Must Not Understand the Bible's Take on Slavery
Next Post