Sixth Graders Need to Learn About the Ten Commandments, Says Guy With No Grasp on Reality April 17, 2012 Hemant Mehta

Sixth Graders Need to Learn About the Ten Commandments, Says Guy With No Grasp on Reality

Glenn Stankis has been putting up the following signs along the side of the road in Magalia, California — because sixth graders just don’t understand that whole “don’t commit adultery” thing… and everyone needs to acknowledge the Christian god in school: 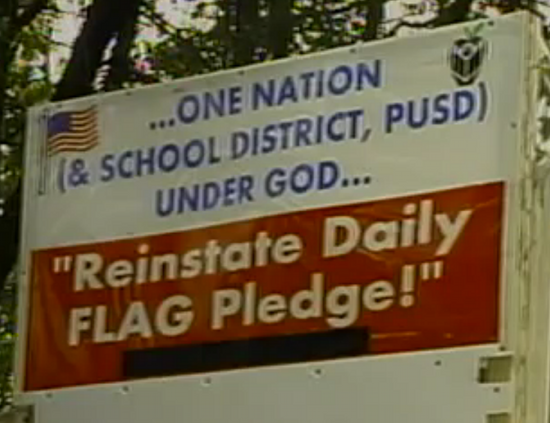 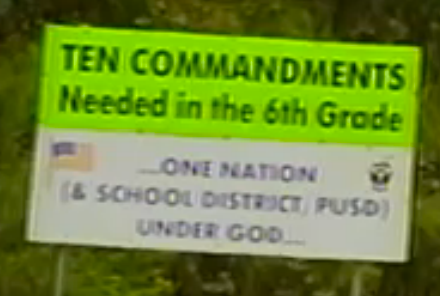 … Stankis alleges some classes within the Paradise Unified School District do not recite the Pledge of Allegiance daily and he hopes his signs raise that awareness.

Stankis ran for the school board on a purely Christian platform four different times — thankfully, he lost each election. Though it’s not hard to see why when you hear how out of touch with reality he is:

“This is a Christian nation the courts have actually ruled that and the district wants to be secular in their outlook,” said Stankis.

At least he’s been getting some pushback. His signs have been vandalized (something I’m not supporting) and the county has realized his signs were violating the law:

Initially, this anonymous complainer was hoping to get the two religious-themed signs removed, but now, Butte County Public Works is looking at Stankis’s signs and others in that area as too whether they meet the letter of the law regardless of content.

“The signs in question appear to violate the Butte County code, which makes it a 55-foot setback from the center line of Skyway. These are the signs that we’re asking them to move and re-locate to a position that is outside of that setback zone,” said Shawn O’Brien, Assistant Director of Butte County Public Works.

There’s a great place for relocation, of course — on Stankis’ property, where his signs won’t be a nuisance to the rest of society.

April 17, 2012 Trading Bibles for Science
Browse Our Archives
What Are Your Thoughts?leave a comment