This Picture of a Muslim Woman Holding a Bra Is Not Offensive April 13, 2012 Hemant Mehta

In an attempt to “humanize” someone who doesn’t always get treated that way, Thompson Rivers University (Canada) art student Sooraya Graham took this picture: 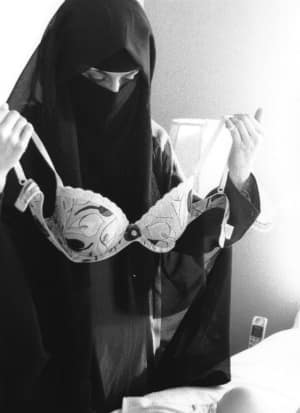 The idea (to me, anyway) is that no matter what we wear on the outside, we still wear similar things underneath.

Turns out that picture — THAT picture — is too offensive for some:

A faculty member did not agree, going so far as to tear down the image from the wall in an exhibition of student work. The artist now is embroiled in a controversy about religion and free speech.

Even though that faculty member – an international adviser, of all things — has since apologized and the image is back to hanging in the university’s art department, not everyone is happy:

Members of the Saudi Education Centre in Kamloops have spoken out in the media, criticizing Graham’s photo mural and calling for her to post an explanatory note with the photo.

Graham, who is Muslim but not of Saudi origin, said she doesn’t feel the work needs to be explained. She said she selected the photo for the exhibit because “it humanizes the veiled woman.”

“You often see the stereotype of the veiled woman being oppressed. We all wear the same undergarments, do laundry, go shopping. I was leaving it open-ended for others to interpret the photo in their own way,” said Graham, who wears the niqab herself.

What is there to explain? A lot of women wear bras, including Muslim ones? I didn’t think we needed a citation for that…

Today, although Sooraya and I are far apart on religious issues — I want her to know that I support her rights and freedoms. I think her photo is very compelling on so many levels. In fact, I`m even a little glad that this controversy happened — because now even more people will see your work and hopefully stop and think about their own biases.