Foundation Beyond Belief has released its numbers for Quarter 1, 2012 and they are incredible:

Atheist members donated over $40,000 to five different organizations (as well as the FBB itself) during the first three months of the year: 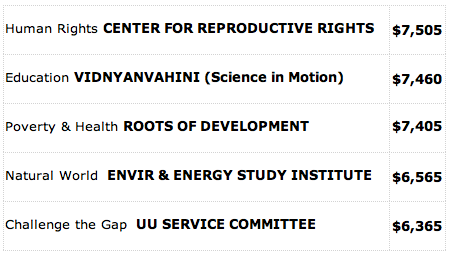 Our members also supported the work of the Foundation itself through a voluntary distribution totaling $4,485 for the quarter. We are grateful for this generous support. Donors also contributed $220 in the final weeks of our Humanist Crisis Response drive for famine relief in the Horn of Africa, bringing total donations to organizations working in the famine area to just over $13,500.

That’s incredible work. And because we’re now giving to five charities instead of ten, it means each group receives (essentially) twice as much funding as before. The impact atheists are making on these organizations is huge. As it stands, we’ve raised over $273,000 for charity altogether.

If you’d like to become a member of Foundation Beyond Belief, you can always do that here.

April 11, 2012
Atheists in Mississippi Talk About What Makes Them Tick
Next Post