‘Teen Mom’ Kailyn Reveals Her Atheism; Fans Respond Just As You Would Expect…

Kailyn Lowry was one of the teens featured in “16 and Pregnant” and (more recently) “Teen Mom 2”:

A few days ago, on Twitter, she revealed that she had no plans to go to church on Easter, choosing instead to spend time with her baby’s father:

She eventually admitted the reason outright (to another fan):

Word spread and Kailyn’s been responding to some of the inevitable pushback for a couple of days now: 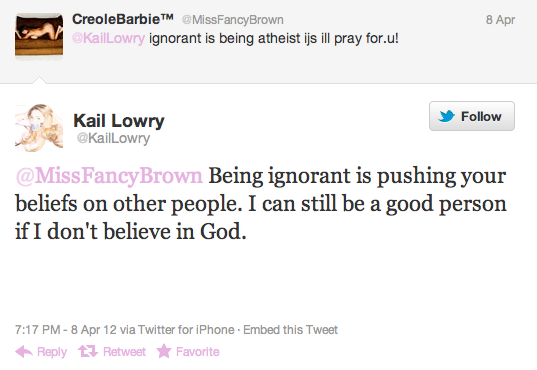 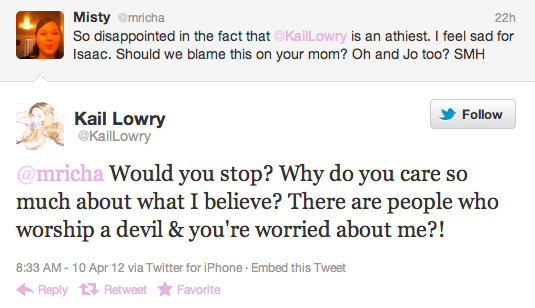 Nice comeback at the end there 🙂 But the insinuation that her atheism should be blamed on her mother? Her baby’s father? Anyone at all?! Ridiculous. It can’t be easy to be in the spotlight (even voluntarily) for something as serious as teenage pregnancy, but I doubt she signed up to have people preach at her. At least Kailyn seems like she can handle it:

Although she may not make headlines as often as some of the other girls, Kailyn Lowry is without a doubt, one of the strongest girls on the show. Even though she doesn’t have a great support system, Kailyn still makes it work and smiles doing it. The fact that she isn’t afraid to voice her beliefs speaks volumes. It proves that she knows exactly who she is and doesn’t care what others think.

Anyway, if you want to send her some atheistic Internet love, go for it.