In Missouri, an ‘In God We Trust’ Sign Goes Up and an Atheist Runs for City Council April 10, 2012 Hemant Mehta

In Missouri, an ‘In God We Trust’ Sign Goes Up and an Atheist Runs for City Council

A year ago, the town of Adrian, Missouri voted to put up an “In God We Trust” sign in their town hall. At the time, Alderman Danny Ferguson did everything he could to put a stop to that, even asking the others *which* god they were referring to. In fact, his attempt to stop the sign from going up is so fantastic, you should go back and read it again.

Now, there are updates to the story. 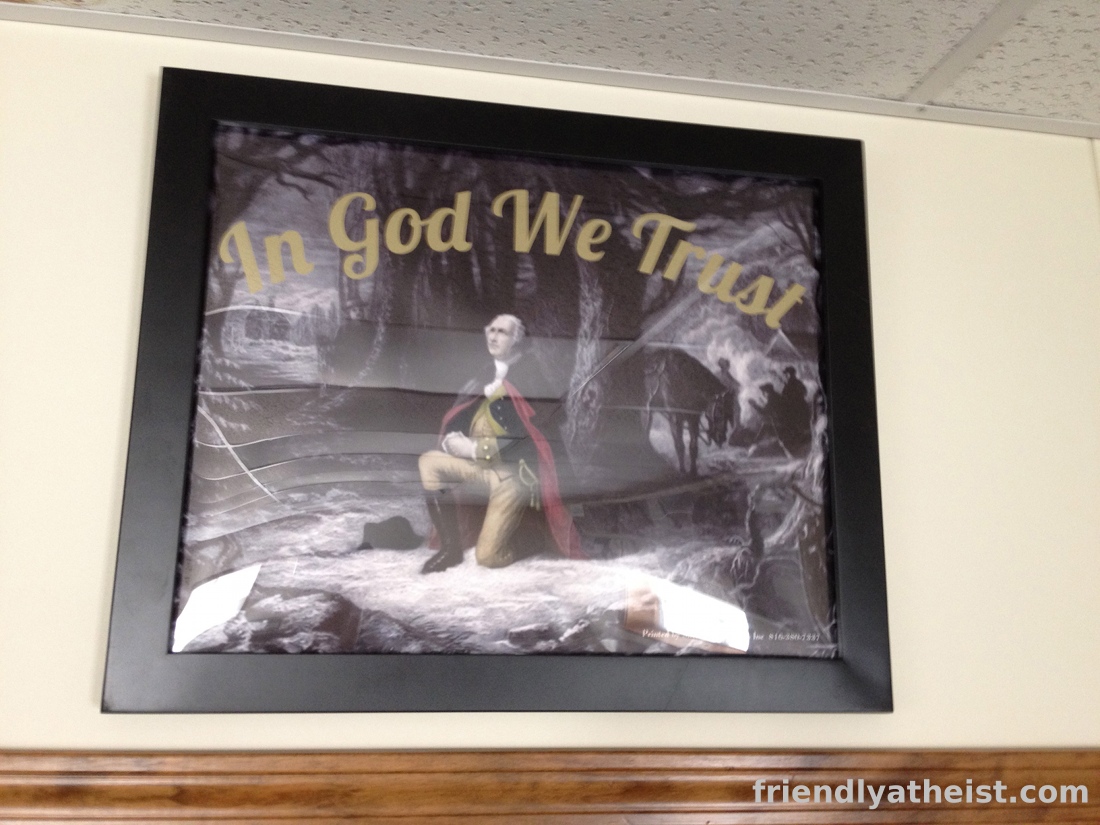 Though they had promised it would be a simple, cheap 8.5 x 11 sheet of paper, the city attorney paid for a framed painting of George Washington praying with the slogan on it…

Meanwhile, Danny was up for reelection and he had a challenger (because who wants a dirty rotten atheist representing them?!)…

I had one constituent tell me that she probably couldn’t vote for me because she “wants to keep God in” the local government. She said she likes me and I’m still one of her favorite students (she was my 2nd grade teacher). She said she didn’t understand why I would leave the faith. I offered to send her a link to things I’ve written and she said she didn’t really want to know…

When the vote was counted, I won 85-70 (yes, it’s a small town). Last night we had the swearing in. As before, I said “on my honor” at the end of the oath instead of “so help me god.” As we sat down to resume the meeting, I heard our retired chief of police (and current part-time officer) grumbling in the back saying that the constitution says you have to say “so help me god.”

I could just overhear him, so I told him, “Don’t worry, it will hold up in court.”

Later in the meeting I was elected mayor pro tem again. After the meeting I spoke with him and he asked if something bad happened to me to make me lose my faith. I explained that I did a lot of reading and saw that there wasn’t convincing evidence for Christianity. He said something like, “Well, you’re really smart, but sometimes we can be too smart.” He also told me he never goes to church, so there’s that.

Right. Can’t have “too smart” people running the town. That would lead to chaos…

Anyway, congrats to Danny on his reelection and his temporary position! It’s nice to see atheists having some political success, at least locally. That sign won’t be coming down with the current makeup of the city council, but we know there’s at least one sensible person voting for separation of church and state.

April 10, 2012
No Female Olympians for Saudi Arabia
Next Post