Church Visits: Not Necessarily a Waste of Time

In the past two weekends, I visited two different churches with various members of my family.  They know about my lack of faith, and I’m at a point where I don’t feel intimidated by religious services or guilty of about my skepticism. Going to church solely for the sake of spending some time with them finally seems like a sensible solution. I don’t regret the decision, either, because the two services provided an interesting study in contrasts.

The first was a Palm Sunday service at the United Methodist church I attended from ages 9 to 18.  The second was a Saturday night Easter service at a megachurch in which I had never before set foot.

The Methodist church has an annual Palm Sunday tradition — all the children walk down the aisles of the sanctuary waving palms, in imitation of Jesus’ welcome to Jerusalem, and sing with the adult choir.  I did this when I was younger, and this year, my 3- and 4-year old nephews were participating. They sang the same hymn I did as a child: “Hosana, Loud Hosana.”

Hosanna, loud hosanna, the little children sang;
Through pillared court and temple the lovely anthem rang.
To Jesus, who had blessed them close folded to His breast,
The children sang their praises, the simplest and the best. 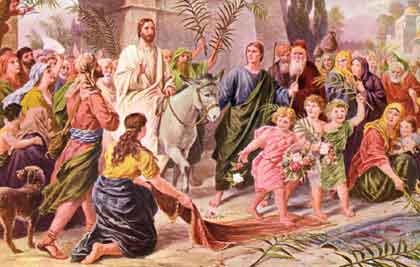 I feel a little queasy about this tradition now. There’s an underlying message about innocent children having an innate understanding of spiritual matters that adults lose due to all that corruption and knowledge the world pushes on them later in life. Remember, Adam and Eve were “as children” in the Garden of Eden until they ate of the Tree of Knowledge of Good and Evil.

I was surprised by by the sparse attendance. When I was active in the church, both of the Sunday services filled the pews. Now it’s only half full the week before Easter.  I was also surprised that the kids did not wear robes. When I did this as an upper elementary student, I was in an actual choir with weekly rehearsals and uniforms for the performances. But with the lower attendance, and perhaps a lack of volunteers, an established children’s choir is harder to pull off. Instead, they just let the kids carry palm branches down the aisles in their regular Sunday clothes, and most of the older boys had their hands in their pockets while they sang.

The sermon was preached by one of the assistant ministers, and it was pretty dry. The reading was 1 Corinthians 14:26-33.

26 What then shall we say, brothers and sisters? When you come together, each of you has a hymn, or a word of instruction, a revelation, a tongue or an interpretation. Everything must be done so that the church may be built up. 27 If anyone speaks in a tongue, two — or at the most three — should speak, one at a time, and someone must interpret. 28 If there is no interpreter, the speaker should keep quiet in the church and speak to himself and to God. 29 Two or three prophets should speak, and the others should weigh carefully what is said. 30 And if a revelation comes to someone who is sitting down, the first speaker should stop. 31 For you can all prophesy in turn so that everyone may be instructed and encouraged. 32 The spirits of prophets are subject to the control of prophets. 33 For God is not a God of disorder but of peace — as in all the congregations of the Lord’s people.

I was more interested in what was unsaid.  The selected passage conveniently stops right before the Apostle Paul says something offensive to most modern ears.

34 Women should remain silent in the churches. They are not allowed to speak, but must be in submission, as the law says. 35 If they want to inquire about something, they should ask their own husbands at home; for it is disgraceful for a woman to speak in the church.

I have seen these two verses before, but I had forgotten the context. This is a New Testament text laying out the rules for an orderly Christian congregation that is pleasing to God — and it explicitly includes instructions about silent, submissive women. The United Methodist denomination clearly does not follow that particular dictum — they ordain women, and it was a female minister who gave the reading.

A denomination that ignores the parts of the Bible they don’t like is preferable to the alternative, but the way my former church approaches the issue leaves a lot to be desired. It would be nice if they could explain why they reject that particular excerpt, or how lay people can tell which parts of their holy book to ignore. I don’t think any such standards exist, though.

The mega-church Easter service was a different animal. This church owns a massive campus, with numerous facilities. There are four services most weeks in the main auditorium, and six on Easter weekend. I sat with about 2,000 worshipers at service number three.

The auditorium has a large stage, theatrical lighting, and arena-quality video screens. The senior pastor, who is a much better speaker than anyone employed at my old Methodist church, gave a sermon about being raised by an abusive addict.

Naturally, the religious messages rang hollow for me. He said that while he would never wish a childhood like his on anyone, he was somewhat lucky because he realized how much he “needed God” at a young age. He attributed his mother’s spiral into alcoholism and sleeping pill addiction to Satan, and her decades-later recovery to God. I have profound problems with these ideas, but I expected to hear them. I did not expect to hear some interesting observations on relationships between abusive parents and their adult children. He discussed the guilt he felt about no longer loving his mother the way he knew he was supposed, and said he understood that those in the audience with similar backgrounds were likely to have similar feelings.

Because of there were portions of the sermon I liked, I was more disappointed by the way it ended then I had a right to be. He pointed his finger at the crowd and said he wanted men to fulfill their roles as “spiritual leaders” of their families by guiding their wives and children to a baptism station set up outside the auditorium. Demonstrating his great consideration, he also assured the women that there was a makeshift salon set up as well, so that they wouldn’t have to worry about how their hair would look afterwards. I suppose he believes more of what Paul wrote than Methodist clergy do.

These two church experiences combined to give me further insight into how Christianity is taught and practiced on a weekly basis. Of course, I had a lot of experience with church as a child and teenager, but I’m able to observe more clearly now that I’m an acknowledged atheist. I certainly won’t be making any affirmations of faith or taking communion, but I think I might make a habit of church visits.

April 10, 2012
'Teen Mom' Kailyn Reveals Her Atheism; Fans Respond Just As You Would Expect...
Next Post